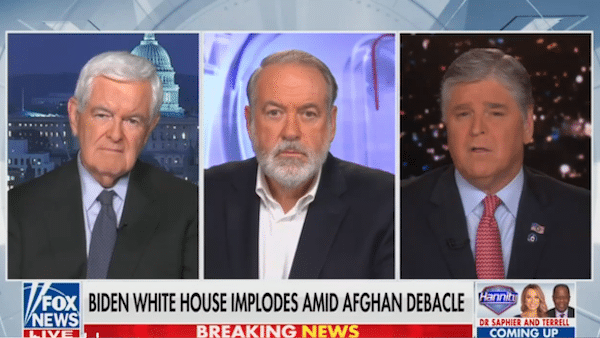 Newt shares what President Biden’s perspective on Afghanistan is and why it is so dangerous for the United States going forward.

Look I think you have to assume that Joe Biden is Joe Biden. He ran as an antiwar candidate in 1972, he has always opposed American interventionism, he’s for a weak America withdrawing from its enemies. We need to be clear; he has surrendered to the Taliban. That’s really what the Secretary of State is explaining. They’ve surrendered. Taliban now not only controls Afghanistan, the Taliban controls the Biden administration’s ability to do anything in Afghanistan and I suspect they are not going to break their word because they’re going to say any real effort to do more than the Taliban will tolerate will lead to a sudden explosion and requirement for a large number of Americans and that’s not where Joe Biden is going. I think if he has to sacrifice 5,000 Americans and 40,000 Afghans to get out of Afghanistan, he is going to sacrifice them. He’s going to say gosh life’s hard, sorry that happened, but we are gone. I think that’s who he is.

In a heartbeat. I think his view of life is that he’s a historic figure getting us out of Afghanistan and just look at the harshness of their attitudes, look at their whole tone. Look at how stupid this whole process is. You can’t assume that this happen by accident. They gave up Bagram which was the key to military power in the region voluntarily. The Taliban was not going to capture Bagram, it wasn’t possible. We surrendered if you just say the words, Biden surrendered to the Taliban and now we’re working out the surrender process. You understand exactly what’s going on.