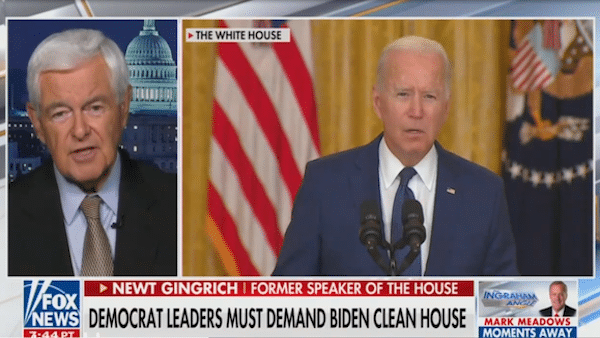 Newt on President Biden’s Afghanistan approach: “The most pathetic, ignorant, and wrongheaded act of national security…”

Well, this is an unusual circumstance. We have not seen a president this incompetent, we haven’t seen a president surrender to an enemy in the way that Joe Biden has, and he has allowed a 7th century tribal group to defeat the most powerful country in the 21st century. It’s an astonishing outcome, so I think the congress, if they actually cared about America and wanted to put America first, rather than partisan politics, both the house and senate would go into special sessions, one, to hold hearings and really try to get at the truth. Two, I think, to insist on firing an entire group of people. You can’t, as a practical matter, fire the president, but the national security advisor, the secretary of state, secretary of defense, chairman of the joint chiefs, commander of the central command, I mean, we have learned that the system has failed. And it’s failed in a way which is humiliating America around the world. It’s failed in a way which has gotten some courageous young Marines killed and other people killed. With a likelihood to continue to have this going on, the comments by central command, commander, oh, there will be more attacks like this — what nonsense. The whole point is you bring in enough troops, you that you block the attacks. You bring enough intelligence assets, enough overhead things like predators, you do what you have to do to protect your people. And I think this is the most pathetic, ignorant, and wrongheaded act of national security, I think, certainly in my lifetime, and maybe in the history of the country. This is an astonishing — self-imposed defeat.

First of all, the Bay of Pigs, they had an operational plan, they changed the plan. It ended up not working. Kennedy took responsibility for it. But he didn’t go and surrender to Castro. He didn’t turn over American equipment to the Cuban communists. You look at what Biden has been doing, and I found it very chilling today, when he shifted to “We are going to get as many people out as we can,” boy, that is something congress ought to insist on. Every American and every Afghan ally gets out, or we don’t leave. We don’t listen to the Taliban. We tell the Taliban. And if that means putting b-52s and B2s over Afghanistan again and it means using predators and doing, frankly, to the senior leadership exactly what we did to Soleimani, the thing that Trump had done is he had really scared them. Because he wasn’t going after their rifleman, he was specifically targeting the leaders of the Taliban. And they had seen enough of that with Baghdadi and with others I think they were generally scared.

I listened to the veterans earlier who get it and understand the Taliban. We have been killing these people for 20 years. They are not going to be happy with us. They are, in fact, going to be quite cheerful about stepping to one side. One of the questions that has to be asked, if we released 5,000 prisoners when we closed Bagram, how many of those prisoners were involved in today’s attack? How many will be involved in tomorrow’s attack? This whole thing is a nightmare, and it was totally unnecessary.