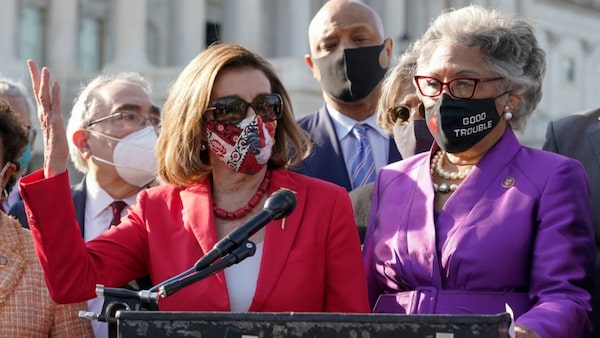 So-called centrist House Democrats folded their hand to House Speaker Nancy Pelosi on Tuesday as they all voted to pass the Sen. Sanders $3.5 trillion budget reconciliation bill. With such a slim margin for error in the Democratic controlled House, Speaker Pelosi could not afford to lose nine votes on the massive budget blueprint. The 212 House Republicans voted against the measure, while Pelosi whipped all 220 House Democrats to vote for final passage. Moderate Democrats were told that if they voted for the budget outline, Pelosi would move the $1.1 trillion bipartisan Senate infrastructure bill up for a vote in September.

Both the budget reconciliation bill and the infrastructure package would blowout federal spending by $4.6 trillion, the largest legislative spending package in congressional history. If signed into law, this would be the greatest tax increase since 1968. In the Senate, Sanders and Chuck Schumer will need to whip every Democrat, as there is no Republican support. With 51 votes, including Vice President Kamala Harris breaking a 50-50 tie, Democrats would send the budget reconciliation bill to the president’s desk for his signature. Pelosi was able to get every supposed centrist in the House to pass the blueprint with little more than a promise to bring to the floor an infrastructure bill by Sept. 27.

To read more about how the Centrist Democrats folded to Speaker Pelosi visit the Wall Street Journal.