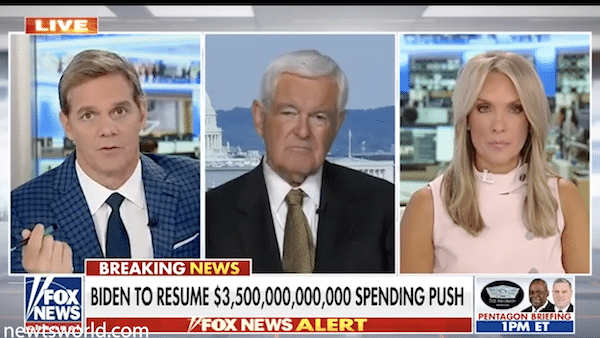 Newt shares what President Biden’s perspective on Afghanistan is and why it is so dangerous for the United States going forward.

If the president is right that 10 percent of Americans are still left in Afghanistan, then that’s potentially a hostage crisis on a giant scale. We don’t know what the Taliban is going to do. They could say that any American that wants to can leave, but there’s also a possibility that at last one part of the Taliban is in a very aggressive attitude. They’ve been out killing people, they’ve begun to help down people who helped Americans, they’ve shot at least two police chiefs for helping Americans. If they decide to go on a retribution cycle, you’re going to see a lot of people die in the next three to six months. We just don’t know how they’re going to govern at this stage. They spent 20 years at war, not 20 years preparing to take over the country. Their goal was desperation, for Americans to get tired and go home.

It might be. There’s two challenges: one is, we did a survey and something like 59 to 16, people preferred free market capitalism to big government socialism. I’m not sure a Bernie Sanders, $3.5 trillion big government socialist bill is going to be very popular once people actually look at it. Second, this collapse in Afghanistan, the way Biden presided over the disaster, this going to cause us to think about funding against China, against North Korea, Russia, Iran. I don’t think we’re going to save any money by proving that we’re weak and unwilling to stay and that we’re willing to cut and run. If anything, the world is going to be more dangerous, and we’ll be forced in, just like Jimmy Carter was, spending more money on defense, because of the nature of our enemies.

I’m guessing, but I think he is extremely angry. He saw himself as a heroic figure, getting us out of a 20 year war, and then it all went to pieces. the imagery of him at Dover receiving the fallen bodies while looking at his watch was as devastating as anything I’ve seen. To have the families of the dead erupt against the president in that kind of a setting is literally unprecedented. He must feel like now like he’s almost trapped because every time he turns around there’s someone telling him how stupid this is or how bad it is. I think he’s decided he’s going to go straight forward, force his way through, and hope we’ll go to a new topic and move beyond this. I think he’s in for a huge shock. There’s certain events, such as 9/11, that are historic; they don’t disappear, they don’t go away. I think the way he left, not that he left, was so humiliating, and the notion that we would leave 10 percent of our people behind, that is so un-American and such a violation of our traditions that I think he’s going to find that this isn’t going to stop.