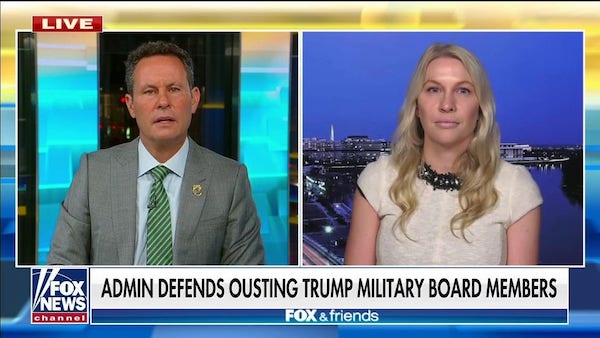 Retired Army Capt. Meaghan Mobbs recently appeared on Fox & Friends to discuss President Joe Biden’s recent request that she resign from her position on the Military Academy Advisory Board. Other members of such boards include former Trump advisor, Kellyanne Conway and Sean Spicer.

On Fox & Friends, Mobbs discussed her disappointment in the new administration’s politicizing of the United States military academies. Mobbs said “There has been a long tradition of being nonpartisan to ensure that we are offering the best possible advice and instruction to our West Point cadets.” She continued by saying that many board members serve across multiple administrations, and provide a variety of perspectives relevant to the role.

Mobbs said “I served alongside Obama appointees and they were extraordinarily respectful and embraced all of us that were appointed during that period.” On Sept. 8, Kellyanne Conway took to social media to express her anger with the President over his request that she resign from her position of the Board of Visitors to the United States Air Force Academy. Her tweet reads “President Biden, I’m not resigning, but you should.” When pressed on this issue, White House Press Secretary Jen Psaki defended President Biden for his unprecedented actions.

To read more about this issue, visit Fox News.