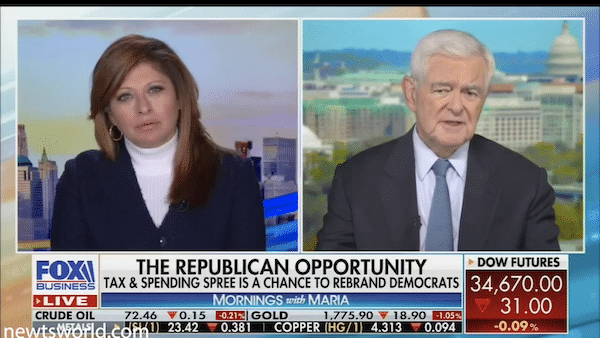 Newt shares his thoughts on the “fantasy world” Joe Biden and other Democrats are living in as they continue to push a socialist agenda.

Glad to be with you. It’s amazing to me what’s going on its almost like having watched how uninformed they were to Afghanistan and what would happen there. They seem equally uninformed about the American people. Big government, socialism is supported by one out of every six Americans. One out of every six. Scott Rasmussen reported days ago that 71% of the American people, 3 out of 4 think they already pay taxes that are too high and yet you have this big government socialist bill written by Bernie Sanders, a devout socialist so it’s a legitimate to say it’s a big government socialist bill and no moderates in house and senate that got 100% of the Democrats to vote to create big government socialism on a grand scale and remember, Bernie has said, he really wanted it to be a 6 trillion-dollar bill. He thought this was the compromise at 3 and a half trillion with about a 3 trillion-dollar tax increase. So, I think the Democrats have walked into a disaster if Republicans can be disciplined enough to focus on big government socialism and drive home just what that vote means.

Well, and to go back to your earlier guest on the border, this bill has $105 billion to help illegal immigrants get settled in the United States. I mean, we’ve moved from if you’re here illegally you should go home but if you’re here illegal, can we give you a bunch of money. And then we wonder why there are so many people crossing the border. The Biden administration is sending a signal not just to Central America but across the whole world. In fact there are several countries in Africa now that are major contributors to crossing the southern border and I suspect that the Taliban and its various terrorist allies will pretty rapidly figure out that, you know, it’s pretty easy to enter the United States. You go to Mexico and walk north. This is a policy of insanity, and they are actually incentivizing it in the Bernie Sanders big government socialist bill with 105 billion extra dollars for — signed to illegal immigration to help them get used to being an American.

Well, look, I think Biden lives in a fantasy world. Ronald Reagan used to say it isn’t liberals know what scare him but what don’t know that isn’t true. I think Biden belongs to the wing, as well as the secretary of state that believes that the Lion King was documentary, and the lions and zebras sing and dance together and love each other and treat criminals here at home that way, they treat terrorists overseas that way. Guess what, lions are real and eat zebras, terrorists are real, and they kill people, criminals at home are real and kill people and when you have policies based on a fantasy vision of reality which is what Biden does and what all Democrats now do because they are all the same. They are all big government socialists with fantasy view of the world and when they go home, all their opponent has to do to hold up the congressional record and their vote is right there. So, it’s going to be very hard for them to lie oh I’m really a moderate– there were no moderates in the Democratic party.

Well, let me draw a distinction here. First of all, if they believe that what worked in California works anywhere else, I’m all for them following the strategy because in 2016 Hillary Clinton carried California by a huge margin and lost the rest of the country. So, if you’re talking about senate races in places like Arizona and you’re talking about house races everywhere in the country including the Republican parts of California, they — they believe that if they run around screaming Donald Trump, Donald Trump, Donald Trump it works. We had a test case in Virginia where Glenn Youngkin, the Republican run a positive ideal-oriented philosophically based campaign and despite every effort by the Democrat former governor to scream Donald Trump, people realized that Glenn Youngkin isn’t Donald Trump. He is a very successful businessman doing a great job and much more likely to create jobs for Virginia than Terry is. The big lesson for Republicans in California is simple. You cannot run a base-focus campaign because in the end you alienate all of the independents, and we have way too many consultants who think of only if I can turn out the Republicans it will be great. There aren’t enough Republicans in California to win unless you pick up the independents.