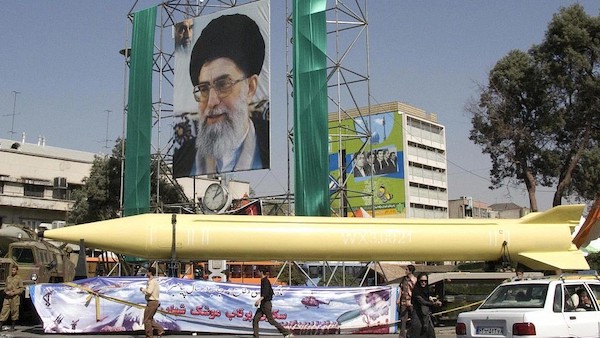 Iran could produce enough weapons-grade uranium for one nuclear weapon in “as short as one month.”

The leaders of Iran may be cruel, but they’re also patient. They understand the effectiveness of making tactical concessions to preserve strategic gains — three steps forward and one step back is still two steps ahead.

Nowhere is this dynamic clearer than in the nuclear realm, where each day Iran gets closer to building a nuclear bomb. Indirect talks between the regime and the U.S. to return to the 2015 nuclear deal, which curbed Iran’s nuclear program in exchange for removing sanctions, hasn’t been the only form of negotiations with Iran this year to prevent such an outcome.

Indeed, the International Atomic Energy Agency (IAEA), the United Nations’ nuclear watchdog, has been negotiating with Iran to continue monitoring its nuclear program. The idea, of course, is to ensure the program is peaceful and the Iranian regime doesn’t secretly try to breakout toward obtaining nuclear weapons.

In February, Iran withdrew from the “additional protocol,” which gave the IAEA intrusive powers to inspect Iranian nuclear facilities. In effect, Iran’s withdrawal blocked the agency from monitoring several sites in person.

Iran eventually agreed to allow cameras to record information at its nuclear sites, but the IAEA wouldn’t have access to the data. How this deal does any good without guaranteeing the IAEA access to the information on the cameras remains a mystery.

But, hey, at least the IAEA could change the cameras’ batteries and memory cards. Even this, however, proved too intrusive for Iran, which allowed it to be done in May but not last month.

The latter Iranian refusal left both parties at an impasse. Then on Sunday, Iran agreed to allow IAEA inspectors to service and install new memory cards into the surveillance cameras at sensitive Iranian nuclear sites. But the agency still can’t gain access the data gathered by the cameras. The regime can delete it any time.

Yet both parties released a joint statement describing their “spirit of cooperation and mutual trust.”

Just last week, the IAEA released a report castigating Iran for refusing to allow its inspectors to access undeclared Iranian nuclear sites where the agency had discovered traces of uranium.

“The director general remains deeply concerned that nuclear material has been present at undeclared locations in Iran and that the current locations of this nuclear material are not known to the agency,” the report states. “The director general is increasingly concerned that even after some two years the safeguards issues … in relation to the four locations in Iran not declared to the agency remain unresolved.”

The IAEA thus concluded that the “lack of progress in clarifying the agency’s questions concerning the correctness and completeness of Iran’s safeguards declarations seriously affects the ability of the agency to provide assurance of the peaceful nature of Iran’s nuclear program.”

In other words, we simply don’t know the true extent of Iran’s nuclear program. But what we do know is troubling enough: According to the Institute for Science and International Security, Iran could produce enough weapons-grade uranium for one nuclear weapon in “as short as one month.”

So much for a “spirit of cooperation and mutual trust.”

Despite this context, however, the media and the IAEA are hailing Sunday’s deal on nuclear monitoring as a way to avert a diplomatic showdown. But look at the bigger picture: Iran made a tactical concession to preserve its strategic gains. The IAEA and Western diplomats will be satiated for the time being, content with a small victory to prevent a crisis. Meanwhile, Iran continues marching toward the bomb.

Indeed, just look at what happened — or more accurately, what didn’t happen — at the IAEA Board of Governor’s meeting on Monday. The U.S. and the three European parties to the nuclear deal — France, Britain, and Germany — had been preparing a resolution to condemn Iran following the IAEA’s report on the regime’s stonewalling.

But then Iran agreed to the recent deal and said such a resolution would threaten the prospect of resuming stalled talks to revive the nuclear deal. So, the Western powers scrapped the proposal, no doubt out of an almost maniacal, even religious desire to save the 2015 accord, which has been beyond saving for some time.

“Iran played its cards well,” a Vienna-based diplomat said of what transpired over Sunday and Monday. “The promise to continue high-level discussions on the outstanding issues managed to deflate the pressure for a resolution, even if what [the IAEA chief] brought back from Tehran was pitifully little.”

Pitiful, indeed. Iran can continue its nuclear work in peace, knowing full well the West will appease it at each step.