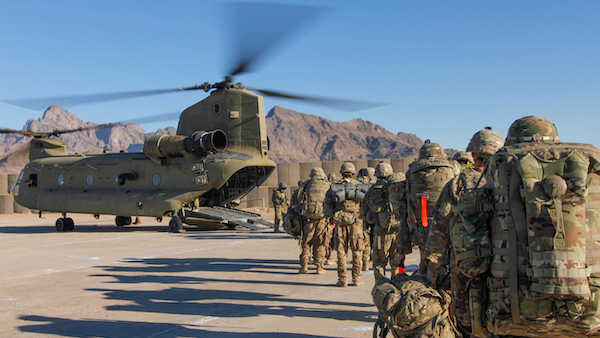 As the Taliban imposes its barbaric rule over the Afghan people and al Qaeda regains a countrywide haven, it’s clear America has failed miserably in Afghanistan. We lost the war, plain and simple — ultimately surrendering in humiliating fashion.

The debacle in Afghanistan should cause the U.S. government to examine two crucial questions: What went wrong, and what lessons can we learn from America’s longest ever war?

Above all, the key problem was we never had a coherent, functional strategy guiding the war effort. The military spent plenty of time thinking about and mastering tactics. But killing terrorists, while necessary, clearly wasn’t sufficient to achieve victory.

What were we doing in Afghanistan? Were we just trying to prevent a terrorist stronghold, or were we trying to rebuild a radically different society into a Westernized democracy? What would victory look like, and how would we achieve it? After the first few months of conflict, no one in Washington seemed to be able to answer these questions — certainly not concisely or coherently. And no two people seemed to have the same answer, which meant people weren’t on the same page across the government.

Politicians and other civilian leaders are of course at fault for this lack of strategic thinking, but so too are the generals, who had every opportunity to go back and work on a military strategy.

But as in Vietnam 50 years ago, the military struggled in Afghanistan to adjust to the unconventional realities on the ground — namely, how to counter an insurgency in an enduring way.

America still doesn’t have a coherent, effective counterinsurgency strategy to apply anywhere, not just in Afghanistan, even though we’re involved in several insurgencies around the world to varying degrees. Since the U.S. isn’t willing to apply a certain level of ruthlessness to impose its will on a country where there’s irregular, guerrilla warfare, then Washington needs to design an appropriate strategy that takes into account both who we are and who the enemy is.

On the latter point, there were fundamental realities that we never fully understood about Afghanistan. For example, opium is an enormous source of revenue for Afghans, and endemic corruption is part of the culture. Our approach to address these issues was inconsistent and misguided. We kept bouncing around, never settling on a clear path forward. That’s a recipe for failure.

Furthermore, I remember talking to a Navy lieutenant who was assigned to a town near the Pakistani border in a traditional area. The lieutenant said to me that we Americans don’t understand that the two primary sources of wealth and prestige for an Afghan male are his goats and his wives. And we kill their goats while threatening to liberate their wives but still expect them to like us. As the lieutenant explained, many Afghans viewed the idea of participating in a 21st century society as terrifying — not an opportunity.

The Pentagon seems to have now given up thinking about counterinsurgency. Large bureaucracies do what make them comfortable, and no bureaucracy is larger and more slow-moving than that of the Pentagon.

I discuss all this with Washington Post reporter Craig Whitlock this week on my podcast, “Newt’s World.” Whitlock has a new book out titled, The Afghanistan Papers: A Secret History of the War, which is essential reading. The book reveals people who played a direct role in the war, from leaders in the White House and the Pentagon to soldiers on the front lines, detailing how the war effort was a complete mess.

Perhaps most concerning, officials at all levels of government altered the data to present the best picture possible of the situation in Afghanistan. Meanwhile, there was no serious effort to think differently and creatively about how to prevail.

This is largely a problem of our bureaucratic system, which has a tendency to avoid telling the truth about our failures and confronting new realities. Such inertia helped lose us Afghanistan. Some may say that’s not a big deal. But this lack of innovation and recognizing a crisis before it’s too late could cost us a war with China down the road. The system needs to be updated before more Americans get killed.