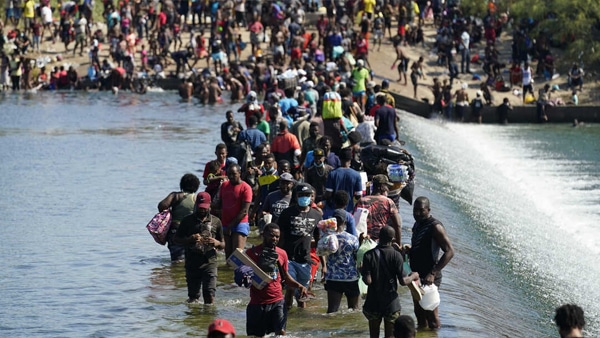 American immigration policy should be fair and humane. What we’re seeing on the southern border right now is anything but — and the direct result of the left’s open-borders agenda.

President Biden is doing a wonderful job of showing why the southern border needs to be secure. Perhaps Donald Trump could hire him as a campaign surrogate for 2024.

Indeed, under the Biden administration, we’re seeing just how destructive a left-wing immigration policy, underpinned by an open-borders agenda, truly is for the country.

In recent days, thousands of Haitian migrants have been crossing the Rio Grande, massing in Del Rio, Texas. They’re illegal immigrants, expecting to be able to claim asylum in the United States.

These roughly 15,000 Haitians fled extreme poverty and are now living in horrid conditions around the Del Rio International Bridge. They may have COVID-19. But they figured their chances of gaining asylum in the U.S. were worth the risks.

They calculated correctly: According to the Associated Press, many of the migrants are being released in the United States. As one U.S. official put it, the Haitians have been freed on a “very, very large scale” in recent days. Many have been released with notices to appear at an immigration office within 60 days. Many won’t show up.

Another official said that large numbers of Haitians were being processed under immigration laws and not being placed on expulsion flights to Haiti.

Meanwhile, as this security and humanitarian fiasco began, Democrats in Congress were pushing to offer a pathway to citizenship for millions of illegal immigrants.

Sure, the Senate’s parliamentarian declared this week that the Democrats couldn’t follow through with their plan — namely, using their $3.5 trillion mammoth spending bill to give millions of immigrants a chance to become citizens. But it’s quite fitting that the left was trying to provide some 8 million green cards to undocumented immigrants as thousands more began pouring across the border.

No wonder we’re facing a crisis at the southern border. Incentives are crucial to public policy, and the Democrats have been doing everything they can to incentivize people worldwide to enter America illegally.

The proof is in the numbers. Over all 12 months of 2020, during which President Trump was in office, there were about 550,000 illegal border crossings. Over the first eight months of Biden’s presidency, there have been well over 1.2 million. And the numbers are rising.

This spike isn’t difficult to explain. First, look at the messaging.

Asked what the U.S. should do about the Haitian migrants, Vice President Harris responded, “Talk about a country that has just experienced so much tragedy, that it’s been about natural disasters, the head of state assassinated, and we really have to do a lot to recognize that as a member of the western hemisphere we’ve got to support some very basic needs that the people of Haiti have.”

No talk of border security, no talk of deportations, no talk of the effect on American communities — the only message is we need to care for these people no matter what. Once they cross the border, they’re our responsibility.

Second, look at the policy. Earlier this year, Biden ripped up his predecessor’s Remain in Mexico policy, officially called the Migrant Protection Protocols. Under the protocols, asylum seekers from Central America had to stay in Mexico during their immigration proceedings. This proved to be an effective solution to the rampant abuses of America’s asylum system.

This is painfully relevant to the situation in Del Rio. Under U.S. law, in order to receive asylum, individuals leaving their own country are supposed to have to demonstrate a “credible fear” of persecution if they return home.

“Credible fear” means that if someone goes home, they will likely be abused, tortured, imprisoned, or killed. In other words, fleeing desperate poverty doesn’t apply. Nor does fleeing less developed, crime-plagued countries. Such people can legally immigrate to America if they so choose.

Think about it: If the U.S. were to grant asylum to anyone who wanted to escape a poorly run country or poor living conditions, such as the Haitians currently crossing the Rio Grande, we’d also need to be prepared to let in at least a few billion people from dozens of countries around the world. This is childish thinking, yet it’s the standard that Biden, Harris, and many Democrats in Congress want to set for granting asylum.

What’s more, under widely accepted international standards, asylum seekers fleeing genuine persecution are supposed to stop in the first country they reach where they won’t be subjected to such persecution.

Genuine asylum seekers, therefore, aren’t supposed to be allowed to cross the entirety of Central America and Mexico to request asylum in the U.S. Yet, this is precisely what the Haitians just did.

American immigration policy should be fair and humane. What we’re seeing on the southern border right now is anything but — and the direct result of the left’s open-borders agenda.

Biden and the Democrats are sending a clear message to potential migrants: Come one, come all. Hence, we have a border crisis, in which no one wins.