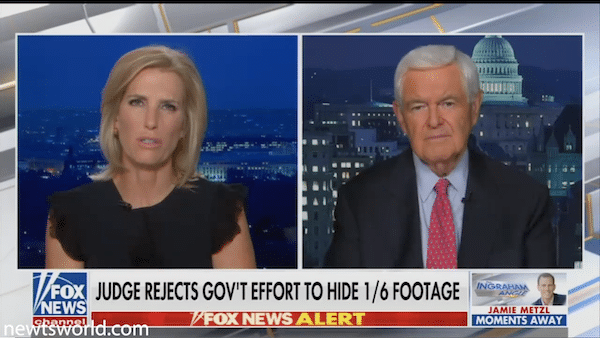 Newt tells how the big government socialist policies of the Democrats will not resonate with most Americans.

I think it’s pretty clear. The FBI said there does no evidence of any significant conspiracy. You had a group of people who did break the law. They should be prosecuted. That’s normally a misdemeanor. The only person killed was an air force veteran, a woman who was killed by a capitol policeman. I suspect they have been very reluctant to release all of the surveillance tapes and they should release them. They don’t hold up to what the Democrats want people to believe. The Democrats have a huge investment in trying to describe January 6th as an Insurrection. It was stupid, it was illegal. People should be punished for having participated. But you compare that to a summer of Black Lives Matter looting, burning, attacking and in some cases killing people. It strikes me this is a remarkably one-sided interpretation of what matters. Again, it fits the entire Biden pattern. They don’t tell you how many people came across the border illegally. They won’t tell you how many of them have COVID. They won’t tell you how many of them have criminal records. They won’t tell you where they are going, where they are shipping them to. This is part of the same general pattern of covering up, lying to the American people and trying to govern like a petty dictatorship. In the House clearly you have a Pelosi dictatorship that bears no resemblance to the House in historic terms. So, I think they should release the tapes. Let the American people look at it. Let the American people decide.

Well, first of all if we are going to rely on Joe Biden to save the planet? I am not sure he can save the White House. That whole notion is pretty hysterical. They may be able to get it through the House, they may not. This is a suicidal notion. This is a big government socialist bill. Big government socialism is supported by about 16% of the country. There are four different polls showing that. So that’s 1 of every 6 Americans favors the bill. It is opposed overwhelming. And when people look at inflation and how fast prices are going up; they think it’s crazy by a huge margin, they think it’s crazy to vote for this bill. A lot of Democrats are going to wave good-bye to their seats if they vote yes next week. On the other hand, Pelosi is willing to break their arms to get them to vote yes.

I think it’s pathetic watching Republicans sellout for 5 cents on the dollar. The amount they will get out of this bill compared to the amount labor unions; big government democrats is going to get it’s about 5%. And I think it’s an awfully cheap thing to give up your vote for that kind of deal.