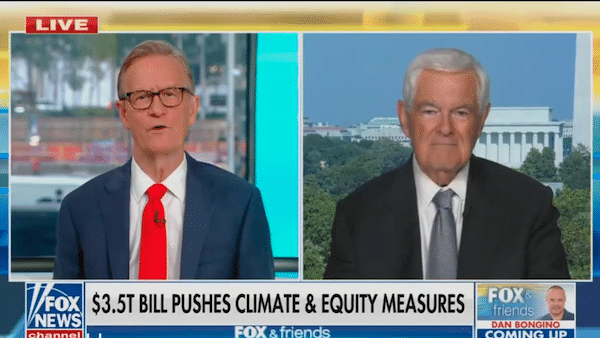 Newt discusses why Nancy Pelosi is leading Democrats “off of a cliff” with radical policies that Americans don’t agree with.

Well, look the difference between the House and the Senate is if the speaker has 218 votes. She could move all of them on the same day if she had the votes. The house could be very fast, and the speaker, as long as they have 218 votes, can get almost anything done, where the senate is a radically different institution and what I’m watching I think is the transition from the donkey to the lemming as the animal that typifies the Democrats and she’s about to take 40 or 50 Democrats off a cliff. I have to confess as a former speaker, her exercise of power is remarkable. She’s moved from twisting arms to breaking them. I think she’s on the edge now of kneecapping people, but she’s getting them inch by inch to go where she wants them to go, and I wouldn’t bet against it this week, but from my perspective in the long run, it’s a suicidal week for the Democrats.

Well because we did a survey and free market capitalism beats big government socialism by 59-16, and she’s walking them right off a cliff of big government socialism. If only one out of every six Americans agrees with you, then when you finally get around to an election you just get slaughtered, and we picked up 54 seats two years into Clinton, John Boehner picked up 63 seats two years into Obama. I think next year, Kevin McCarthy is going to have an enormous majority to be speaker and she will be a major factor. She will have walked these people off of a cliff without parachutes and they can’t go home and explain that they’re moderates. They are all going to be big government socialists by the time she’s done voting.

Look, I think the fact is that Biden and the radical Democrats want to drown America in people who are here illegally. This isn’t an accident or incompetence they believe in all this stuff. And they want to ship them all over the country and then they want us to pay for them with tax money so that they get free healthcare, free housing, free education, you name it, and a lot of these people are not assimilated. They don’t speak English, they aren’t prepared to work here, and they’re not tested for COVID, they’re not checked for criminal records, but this is not an accident. This is what the modern Democratic party stands for. It’s for totally open borders, and by the way the Gallop report is something like 158 million would like to come to the USA. They have a world poll, and when they ask the question worldwide, 158 million volunteered to come to the United States. That’s Biden’s vision of an American future.

Look, the party of Hunter Biden, the party of routine corruption, the party which has all across the country got district attorneys who are breaking the law by refusing to enforce it, those are the same people and the same attitude who are not, they are not enforcing federal law at the border. Basically, it’s a lawless system, and I think that the American people are going to punish them for the kind of incompetence and illegality that they represent.