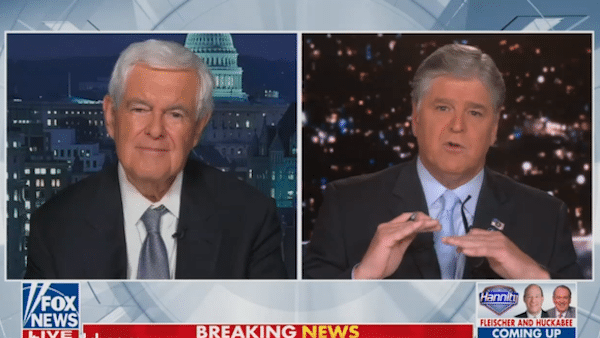 Newt talks with Sean about the big government socialism bill from Democrats, how Republicans should respond, and how he predicts the vote will go.

Well, I think the country loses. And I think first of all with maybe a very few exceptions. Maybe minus Manchin, there are not really any moderates in the Democratic party. When push came to the shove in August, every single Democrats in the senate every single Democrats in the house voted for a big socialist bill that big government socialist bill that Bernie Sanders wrote. How can you have a clearer message than to have an open socialist write a bill — by the way, probably scores a 5 trillion now three and a half trillion. $3 trillion in tax increases. Hires 85,000 new IRS agents to harass taxpayers. Apparently, according to one reading, it provides for free community college for illegal immigrants. So, all these people at the border. They will get to go to college at the taxpayers expense. Nothing is free. That means it is a taxpayer provided college. It is a taxpayer provided healthcare. And so, I think that this is going to be a fascinating week. Pelosi has been very tough she runs a dictatorship. She has been twisting arms. She is now starting to break them. And presently she will start knee capping people. And whether that’s enough…

They are only doing it in the sense that they have enough votes. That she probably can’t pass a purely Democrat bill without their votes. But look at what they have done. For the last year, they have decided everything by themselves. In fact, they even reached over and kicked a Republican off a committee, something that has never been done before. They created an investigating committee, and they controlled Republican appointees. Now they turn like having somebody because your teenage son or daughter had run off with a credit card ran around and charged everything. Bought a Ferrari, bought, you know, a round-trip airline tickets. Stayed at five-star hotels. Then showed up one morning and said, dad why don’t you pay all of my bills? And that is what the Republicans are saying. We are not part of this. We were not in on the take off. We are not going to be in on the landing. And the Democrats have made no effort to reach out to the Republicans and actually try to the share power.

You know, if I were the Republican leadership, I would say, look at you can get our votes. Drop the $5 trillion spending bill. Drop the $3 trillion tax increase. Drop the idea of 85,000 new IRS agents. You know, you want to talk about helping you? Well, this is what it is going to cost for us to decide to help you. And if you don’t want to meet us and negotiate, why would we give you, our votes? I mean, know Republican should vote for the debt ceiling increase. That is the Democrats’ problem. It is their disaster. And frankly, if they keep putting poison pills into the continuing resolution no Republican should vote for the continuing resolution.

Well I think they have a hard time doing that. They are offering a bill that would destroy West Virginia’s economy totally. They are offering some ideas which are deeply opposed in Arizona. Remember big government socialism only has about 16% support, one out of every six Americans. Now, it may be that the Lemming is replacing the donkey as the democratic party symbol and they are all going to run off a cliff together. But I think this is going to be very unpopular in the country. And my guess is they are not going to get it through because in the end, they can’t satisfy those who are not moderates. But they want to survive. And those who are radicals in districts where it does not matter. I think it is almost impossible job for Pelosi.

Look, I think you are faced with the weirdest political coalition in modern American history. I think they are totally out of touch with reality. I think the damage they are doing is unimaginable. And I really worry that these guys could stumble into a big war, not a small war. I worry particularly about China. The Chinese dictatorship has to be looking at this chaos and thinking, this guy is old. He is weak. He is confused. People around him are nuts.