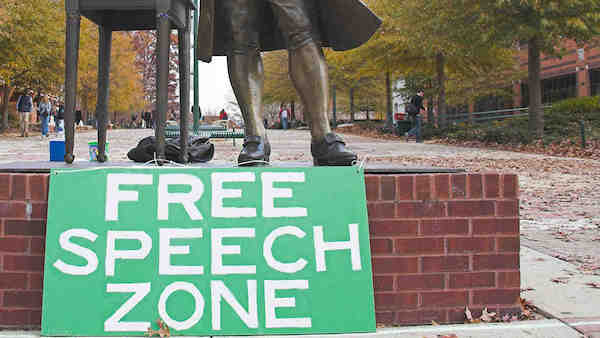 President Trump cared about the voices of America’s youngest voters, while the Biden administration seeks to suppress the voices of young dissenters through unfair disciplinary procedures and restrictions.

Free Speech on college campuses is more important than ever as university students across the country make the long-awaited return to in-person learning this fall. Along with this exciting transition, however, is the anxiety that many students feel in expressing their personal beliefs.

Colleges have long been known to promote liberal ideology to students. Conservative student groups such as the College Republicans, Young Americans for Freedom, and conservative women’s groups, are often extracurricular safe-havens for conservative students. These clubs, however, do not mitigate the threat of retribution from peers, professors, and university administration.

The fear of being “cancelled” has stretched across the country, and is now besetting students on both sides of the aisle. According to Forbes, more than half of college students regularly hold back their political views, for fear of consequences. While many schools proclaim their commitment to intellectual diversity and curiosity, self-censorship and fear prevent the expression of free speech and diverse perspectives. Another report from the Foundation for Individual Rights in Education, surveyed 37,000 students from 159 colleges. The report found that three-quarters of students who identify as strong Republicans, regularly censor themselves, while less than half of strong Democratic students do so.

Recently, colleges have become increasingly combative against speakers who do not promote the university’s liberal ideology. Campus groups spend months coordinating with speakers and receive funding to host top conservative speakers. Many of these events are ultimately canceled by university administration. Ben Shapiro, one of the most popular speakers among young conservatives, has been barred by several colleges including UC Berkley, Gonzaga University, Grand Canyon University, and others due to his “controversial” opinions. The sited “controversial” opinions all boil down to Shapiro’s unapologetic conservatism which violates liberal groupthink on campuses.

University suppression has led to a renewed commitment to free speech by many campus groups. Counter-protests and national representatives from groups such as YAF and Turning Point USA are more vocal against cancel culture on campuses, but the reality is that the left has become so good at suppressing beliefs, many students have been silenced.

As the new administration seeks to undermine our most basic freedoms, we are reminded of the work of President Donald Trump, who defended the rights of America’s youngest voters.

President Trump cared about the voices of America’s youngest voters, and supported a culture of free inquiry and debate. The Biden administration wants to suppress the voices of young dissenters through unfair disciplinary procedures and restriction. When it comes to free speech, Trump was right, and Biden is wrong. Our President must support and defend the voices of young Americans.