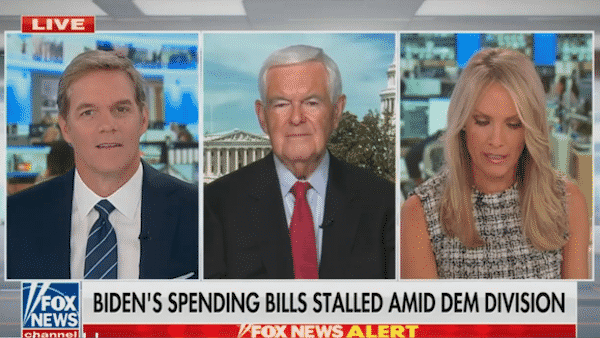 Newt discusses the stance of Sens. Sinema and Manchin on the upcoming spending bill and the possible end of Nancy Pelosi’s House dictatorship.

Well, I mean, it should scare you. This is an effort by big government socialists to profoundly change America. Even Joe Manchin has said in the last 24 hours he doesn’t want to change America. And he — although he’s a Democrat, he said this bill is designed to profoundly change America to create a welfare-dependency and I think it has stunned him as a West Virginian how far they’ve gone. I think that people need to realize this is not an accident. These people are determined to take your money to rebuild your country with them in control, and you see it right now in a fight over vaccines when, you know schoolteachers or been fired, nurses are being fired, policeman are being fired. Do we really want more big government bureaucracies led by politicians totally out of touch with reality? And I think, Sean, you’re exactly on target here. Everybody watching tonight should call their congressmen, their senators, and demand that they stop these bills. It looks, right now, like senator Sinema in Arizona and senator Manchin are going to stop the bill in the senate. It looks right now — it may change, but likely left-wing of the Democratic party there’s going to be in open rebellion in the house before the end of the week. If all of that comes together, then these bills will collapse in their own weight. We did a poll on a project we’re doing called the American Majority Project and let me just say only one out of every six Americans — 1 out of 6 — favors big government socialism.

Look, I don’t think you can explain what’s happened to America without looking at the news media. The effort by the elite media to not cover everything that’s gone on, to protect Joe Biden, to protect the Democrats — you know, when you go out and you start looking and you begin to realize — first of all, I just want to say the best country in the world by definition is the United States for a practical reason. Where do people try to get in? You see a big crowd getting into Russia? You see a big crowd getting into China. No, people want to come here because up until now we’ve avoided big government socialism, we had freedom, we’ve had entrepreneurship, we have created wealth. People are dramatically better off in America. And it’s just a strange thing that the left wing of the democratic party is committed to making us as sick as Venezuela or Zimbabwe or some of the European countries with systems that don’t work. I mean, you go out and you look at all these big bureaucracies are hopelessly incompetent. They need to be much smaller, much more effective, much better run and why we would give them with all of their failures this kind of money? I think tells you how ideologically-driven the big socialist Democrats are, and virtually all of them with the possible exception of Manchin and Sinema, virtually all of them are committed to higher taxes, bigger government, more control of your life and this is a real fight I think over the very nature of America and what kind of country our children and grandchildren are going to live in.

Yeah. But I’m just saying if we had a serious Republican congress and a serious Republican president, we’d be back to a balanced budget in 5-7 years because there’s so much waste, so much incompetence in the current bureaucracies, you could get rid of huge chunks and it would actually work better, not worse. There are 240,000 people in the department of Homeland security. That’s inconceivable! Going to give you a good example on the border. If we went back to the Trump model of the border and allow the border patrol to actually do its job, we would dramatically cut the number of people illegally coming into the United States within 48 hours. So, I’m an optimist. Not with the current gang. Because the current gang, they want illegal immigrants to come in. And you’ll notice, by the way, in California and Vermont, they are starting to allow illegal immigrants to vote. Now, that tells you part of the democratic party’s model. They can’t win with regular Americans; they sure can’t win with people who come here illegally from these countries because all most every person I meet who come from a foreign country legally will say to you this is what I got away from. I don’t want these guys to be in charge. And I think that we could fix it but we are never going to fix it if the big government socialists are in charge.