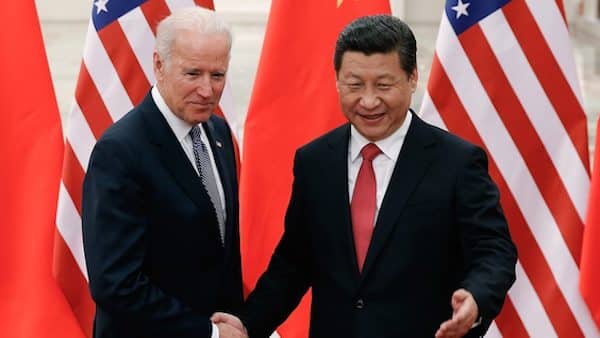 The United States must counter communist China’s long-standing record of economic aggression by strengthening the American economy and ensuring that the U.S. is a competitive, innovative, enticing market for corporations and small businesses.

Last week, House Democrats released a tax plan that would fund the massive $3.5 trillion Big Government Socialist shopping spree.  Democrats will attempt to sell this plan to the American people as an important move to get the wealthy to pay their “fair share.” But the reality is that this proposal will disadvantage Americans, crush free market capitalism, and deliver an enormous advantage to America’s most formidable adversary, the Chinese Communist Party.

According to a February poll by Gallup, a record 63 percent of Americans view communist China’s economic power as a critical threat to the United States.  Particularly in recent months, General Secretary Xi Jinping has been exerting more overt control over the economy, emulating the era of Mao Zedong, and causing concern among foreign investors.

The United States must counter communist China’s long-standing record of economic aggression by strengthening the American economy and ensuring that the U.S. is a competitive, innovative, enticing market for corporations and small businesses.

The Democrats’ tax plan will do the opposite.

The proposal will raise the federal corporate income tax rate from 21 percent to 26.5 percent. If you combine the federal and state taxes, the corporate tax rate would increase to 31 percent.

As Americans for Tax Reform pointed out, communist China’s corporate tax rate is 25 percent, and for certain industries that are of strategic importance to the Chinese Communist Party, the rate is as low as 15 percent.

Furthermore, the proposal increases the capital gains tax to 25 percent, which is also higher than the 20 percent rate in communist China. As experts at the Heritage Foundation wrote, “These are not actually taxes on wealthy Americans. Instead, they are a duplicative layer of taxation on the added value of business activity.” This higher tax rate will make it more difficult to start new businesses and inhibit investment in the expansion of business operations. As a result, it will prop up monopolies and put undue pressure on small businesses.

Joe Biden can claim that taxes will not increase for those who earn less than $400,000, but study after study has shown that American workers bear the brunt of the costs of corporate tax increases. Stephen Entin of the Tax Foundation wrote that there is an “inverse correlation between corporate taxes and wages and employment.” Entin cited studies that “appear to show that labor bears between 50 percent and 100 percent of the burden of the corporate income tax, with 70 percent or higher the most likely outcome.”

It is remarkably hypocritical that the Democrat’s plan to “tax the rich” will ultimately end up negatively impacting the American worker. It is also counterintuitive that in the midst of the ongoing economic threat from communist China, Democrats would stifle American industry and propose a plan that would push business out of the United States.

History has shown that increasing taxes weakens the economy. According to a study by the Tax Foundation in 2012, “Nearly every empirical study of taxes and economic growth published in a peer reviewed academic journal finds that tax increases harm economic growth.”

Similarly, the long-term economic projections of the plan introduced last week are discouraging. The Tax Foundation projected that the Democrats’ proposal will reduce gross domestic product by 0.98 percent and gross national product by 1.01 percent.  It will cause a reduction in wages by 0.68 percent and eliminate 303,000 full-time equivalent jobs.

Any tax plan that weakens the U.S. economy, disenfranchises American workers, and stifles economic activity advantages the Chinese Communist Party.  Congress should be focused on strengthening our economy, not creating policies that are self-destructive.