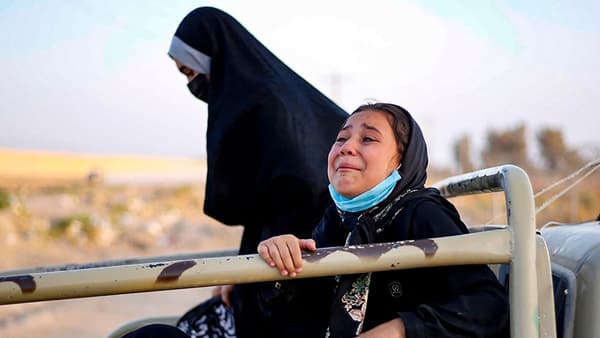 In a press conference on August 17, two days after the seizure of Kabul, Taliban insurgents announced that women in Afghanistan would retain their rights and liberties.  A spokesperson for the Taliban said, “Women will be afforded all their rights, whether it is in work or other activities, because women are a key part of society.”  The spokesperson further pledged, “We are guaranteeing all their rights within the limits of Islam.”

These claims were the Taliban’s attempt to assure the world that women and girls in Afghanistan would not experience the same suffering and targeted violence that they had in the past.  When the regime was in power from 1996 through 2001, women were oppressed under the Taliban’s strict interpretation of Sharia law.  Women who did not abide by the Taliban’s rules could be subject to beatings, torture, or execution.

But after years of increased freedoms and liberties for women in Afghanistan, it has become clear once again that the Taliban has no intention of respecting their rights.

Shortly after the Taliban spokesperson made his claims, the United Nations High Commissioner for Human Rights “received credible reports of serious violations of international human law, and human rights abuses taking place in many areas under effective Taliban control.”

The Taliban has instituted measures to exclude women from public life.  Working women have lost their jobs to men, girls have been restricted from attending schools and universities, and females have been prohibited from participating in athletics.  Additionally, the new Taliban cabinet has no female members, the Women’s Ministry in Kabul has been closed, and officials have instructed women to stay at home for their own safety.

Brave Afghan women have tried to defend their rights by peacefully marching in the streets.  During a march in early September, women demonstrators chanted, “we want equal rights, we want women in government.”  But when the Taliban arrived, these heroic women were beaten with whips and batons.

There is a clear divide between the Taliban’s empty promises and the violent actions that have already been taken against women in Afghanistan.

In response to the ongoing crisis, Representative Ralph Norman (R-SC) – with co-sponsors Reps. Stephanie Bice (R-OK), Mariannette Miller-Meeks (R-IA), Mary Miller (R-IL), and Delegate Aumua Amata Coleman Radewagen (R-American Samoa) – introduced House Resolution 694 to formally denounce the Taliban’s oppression of women and girls.  This resolution demands that the rights and freedoms of Afghan women and girls are preserved and emphasizes Congress’s concern with the treatment of civilians in Afghanistan.

After introducing the resolution on September 30, Representative Norman said, “[T]he safety of Afghan civilians, especially those who are most vulnerable, remains a critical concern. Congress should condemn the Taliban’s actions and be devoted to preserving the dignity of all Afghan citizens.”

The Taliban’s oppression of Afghan women, who have contributed in countless ways to the country’s society, culture, and industry over the past two decades, is a devastating tragedy.  The United States must honor and defend the progress that women and girls in Afghanistan have made by boldly standing with them and exposing the brutality of the Taliban.