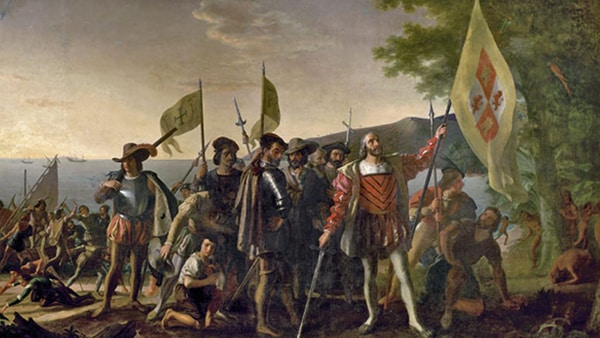 Today we remember the Italian explorer Christopher Columbus, who in October 1492 landed in the Bahamas and became the first Western European to discover what the Europeans would call the New World.

When Columbus and his crew of approximately 200 sailors left Spain in three crowded ships – the Niña, the Pinta, and the Santa Maria – they set their sails toward an unknown horizon. They expected to discover a trade route to India. (Most Europeans at the time knew the earth was round – but they were unaware of the North and South American continents.) Instead of finding a route to Southeast Asia, Columbus and his crew landed on a continent of new opportunities. Columbus’s accidental discovery opened a permanent passage across the Atlantic and redrew the known map of the world.

For this reason alone, Columbus and his voyages are worthy of study and commemoration.

Unfortunately, there is a large and growing effort across the country to erase Columbus from history and demonize him and other European explorers who followed him.  During the civil unrest and riots in the summer of 2020, public statues of Columbus across the nation were pulled down, beheaded, or otherwise vandalized.

While Columbus Day remains a federal holiday, dozens of states and cities across the nation have elected to abolish or replace this holiday in the name of so-called social justice.

All of these efforts emphasize the worst aspects of anti-historic bigotry and erode our understanding of the past. While Columbus and those who followed in his wake may not meet today’s standards of morality, few people in the 1400s would have (including Native Americans).

While Columbus never sailed to what is now the United States of America – or directly participated in England’s colonization of North America – his courage and willingness to risk everything to pursue a better life charted a course which many of our ancestors followed.

Colonial America is a major and often unknown part of our history. It is vitally important that American children understand how our country began and how our characteristics and traits as Americans were shaped in the colonial period.

Sadly, data from the Department of Education indicates a majority of fourth graders don’t know why Europeans sought new trade routes in the 1400s, and only 8 percent have a full understanding of how Native Americans were impacted by European colonists. Further, only 34 percent can identify Jamestown as the first English colony, and fewer than 33 percent of eighth graders know why we fought England during the Revolutionary War.

We have a good deal of catching up to do and erasing pivotal figures such as Christopher Columbus will only put us further behind. Instead of rewriting history, we should make every effort to study it.

This Columbus Day, we hope you will remember the courage of Christopher Columbus in 1492. If we do not preserve and learn from our history, we will fail to understand who we are as Americans.