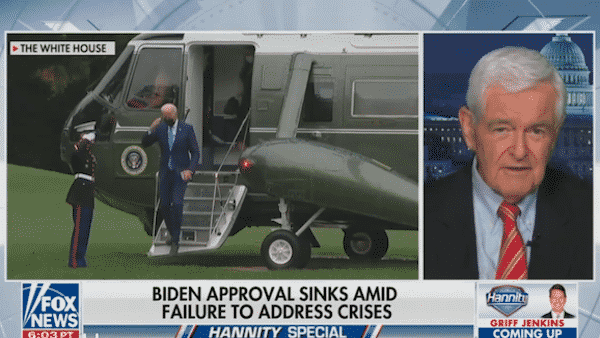 Newt discusses why the American system is facing a crisis today and how radical Democrats are facing trouble in upcoming elections.

I had to start by saying that a friend of mine Sue Roberts just wrote us and say I don’t usually brag about going to expensive places, but I just left the gas station. In that kind of captured, I had the same experience this morning I filled up my truck and it was $64, and it used to be $40 and that’s the Biden inflation tax on all of us. When he said he wouldn’t tax anybody under 400,000. It would be a lie if Biden had any idea what he was saying. But I’m increasingly convinced that the entire left lives in a fantasy world where none of these facts matter and it’s a very hard thing to explain to people. They’re big government socialists they know they can’t be honest about it, so they invent all of these things. A good example is what’s happening with the border. The problem is less and less Guatemala, Honduras, and El Salvador. The problem now is Haitians who fly from Port-au-Prince into Ecuador, come up through Columbia, across the Darien gap and end up literally coming all the way up. It’s Africans who are coming into Brazil and coming on up. The word is out around the planet, Joe Biden wants you to break the law, he wants you to come to the U.S. illegally, so people there saying why not? Your choices Port-au-Prince and New Orleans. There is no question which is the better life for you and your family. You see this on every front.

I think it’s the president. I also think it’s the congress, I also think it’s governors and state legislators. We are a remarkable country at allowing people to be engaged in self-governing and what we are seeing is an amazing split. You have California doing insanely stupid things driving people out of California toward states that have rational government. The gap between the red states and the worst of the blue states is as though they are totally different countries. The red states with the Republican governors, Republican legislators, lower taxes, less regulation, favoring work, favoring the job creation. They are going to do great. They also have schools that actually work. These blue states, California, Chicago, Illinois, New York, they are disasters and all going to get worse because their policies don’t work, their ideology doesn’t work, their union allies are destroying the system and I think it’s a real crisis of the American system and whether or not we ultimately over the next five or six years we eliminate this radical big government socialism, go back to a traditional American model where work matters, taxes ought to be low, you ought to be responsible for your own life and you sought in Virginia when you’re the Democrat candidate for governor say parents should not be involved in the schools. For Terry McAuliffe to say that in a debate tells you how deeply the unions want to own the school room and your child and how much they hate having parents be involved.

Sure. I think when you realize I think there was a poll out today that 50% of people regard the federal government as a threat to their freedom. What you’re beginning to move towards is a war between — not a physical war, but a cultural war between the bureaucracy, the academic world, and the news media and the rest of us and the truth is, there are more of us than there are of these big government socialist radicals who want to impose a very weird worldview and who are apparently prepared to fight the American people. In the long run in a free society, maybe in China or in Russia or in Nazi Germany, you could use the power of the state and get away with it. In a free country, you can’t and the rebellion of starting with the election in Virginia this year and extending I think into ’22 and ’24 is going to be astonishing and these radical Democrats of which Terry McAuliffe you look at his career, he was once sort of a centrist and now has to be a radical because otherwise he can’t run as a Democrat.