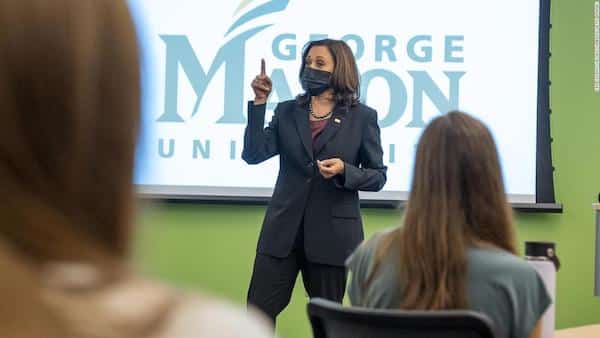 Yet another blunder by Vice President Kamala Harris: A failure to correct anti-Semitic rhetoric.

A student at George Mason University claimed that Israel is guilty of massacring Palestinians, and Vice President Kamala Harris told her that her voice “must be heard.”

This interaction occurred last Wednesday when the VP was visiting a classroom on the university’s campus. Harris gave some prepared remarks and afterward opened it up for a question-and-answer session. It was then that a student proclaimed that the United States should redirect funding from Israel to U.S. government programs such as welfare and health care.

The student, who identified as part-Yemeni and part-Iranian, said “…just a few days ago, there were funds allocated to continue backing Israel, which hurts my heart because it’s ethnic genocide and displacement of people, the same that happened in America, and I’m sure you’re aware of this.”

Instead of correcting the student, or inquiring about what she meant, Harris said that she was “glad” the student spoke up while continuing on to make a statement about unity: “True unity is everyone in that room has a voice. And then we see where that ends up in terms of a healthy debate on the issues.”

Last Thursday, Harris’ team began making calls to pro-Israel Democrats in Washington, reaching out to Mark Mellman, the president of the Democratic Majority for Israel, as well as Ted Deutch (D-FL), the co-chair of the Bipartisan Anti-Semitism Taskforce.

To read more about this blunder by the vice president, check out The Daily Wire.