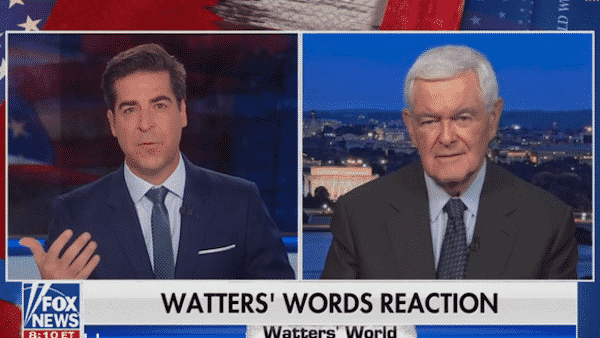 Newt explains why Americans must stand up to the establishment and gives some examples of citizens already doing so.

Yeah. But I think what you are seeing is a steady increase in danger because first of all Biden is both very radical and incompetent. The combination is devastating. And 400,000 people a month come across the border illegally. I don’t understand for example how the illegal immigrant got on an airplane to harass Senator Sinema. In theory if she’s an illegal immigrant isn’t TSA not supposed to not let her on the airplane. What you see at every level is just breaking the law. As you pointed out, it’s a felony in Arizona to invade a woman’s bathroom. It doesn’t matter because it’s in the pursuit of the great cause of left-wing radicalism. You can go through item after item and I think what’s beginning to happen is normal Americans are looking around going, these people are crazy. And a friend of mine said he has seen the same people move from anger towards fear because they begin to realize how really serious the left is. When the attorney general says we are not going to chase terrorists, we’re not going to chase Chinese and Russian spies. We are going to assign the FBI to monitor parents. You know the system has gotten so sick that it’s time for a real crisis intervention to save the core of the American system.

I would urge every single American to stand up and defy the establishment. The fact is there are far more of us than there are of them. If they want to pick a fight, if every time several people go into a ladies room to harass Senator Sinema, maybe the same number should go into a place to harass AOC. I’m not advocating that. But you can’t have it one way and not the other. What surprises me about the left is when you look at people at Talladega championing F Biden. You look at school after school at football games. The people in Michigan giving him the one-finger salute as his caravan passed by. I don’t think they understand the level of rage that’s building, and they are playing with fire. We don’t want to be a country where like Germany just before the Nazis where people are fighting in the streets between organized gangs. But you look at what the left has done including last summer when we had the Black Lives Matter riots across the whole country. Or Portland where ANTIFA is still rioting, and nobody is locking them up. How can you have riots on a daily basis, and the rioters go home have a couple beers, do a little drugs, show up the next night. This is the breakdown of civilization as we know it.