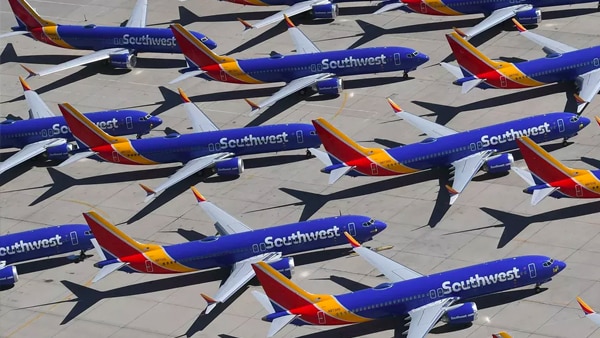 Pilots for Southwest Airlines are banding together against the mandatory mandate by the Biden administration.

Over the past several days, thousands of flights have been canceled by Southwest Airlines. The reasons for the cancellations have ranged from “bad weather” to “absenteeism” by staff. However, messages across social have many speculating that Southwest Airlines pilots are fighting back against the Biden administration vaccine mandate, which they believe should be a personal decision.  Anna Paulina Luna provides her insights in this audio piece.

Listen to more of Anna’s view in this audio recording.

As we know over the last 48 hours, there’s been a huge, huge discussion, especially in regards to the mandates put out by private businesses and then also to government mandates in regards to federal employees. And that’s because if you’ve turned on your social media, you can see that thousands upon thousands of people are seeing flight delays. As Southwest airline pilots have basically decided to band together and fight back against things that they don’t agree with, which is their religious freedom and their ability to say, no, we don’t want to put something foreign like these mandated vaccines into our body. Now, to be clear, I think it’s very important to note that, especially on the topic of vaccines, that’s a very personal discussion. I’m not advocating for or against them, but I will say this people have a right to determine what goes into their body.

And I think that’s one of the founding principles of why our country was started, but as people are saying, great, thank you so much to these pilots for coming together. I think it’s important to note that we wouldn’t be in this situation if legislators had actually done their job in the first place. And so fortunately enough, you know, people like myself and many Floridians and even Texans and people in the Dakotas regions, they have conservative and Republican leadership that basically states that they will let people decide how to best make medical decisions for themselves. But if you aren’t as fortunate as being in one of these red states and you’re in a blue state, it’s not as easy. And I think this discussion is going to be increasingly more important as we move into the general election. Unfortunately, what we’re seeing and, you know, there was actually a member of the NBA who actually came forward and he said that, look, I wasn’t particularly political.

But what I’m seeing is with just this discussion, it seems that the whole fro like pro and anti vaccine discussion has increasingly become politicized. And I think that when you’re looking at why that is that’s because for one in the beginning of Biden’s election cycle, you saw a ton of conflicting information. There is a very, very well-known clip where Kamala Harris literally sits down with a reporter and says that she will not put anything into her body. And basically she will not be taking any vaccines that President Trump had essentially fast-tracked. And I think that when they all of a sudden turn around and expect the American people to trust them after everything that happened in Afghanistan, after everything that happened with our economy. Now you have Kim Jong Un talking about how he’s threatening nuclear war with the United States. How can the American people trust someone when they don’t even trust the president with what he did in Afghanistan? And I think that, especially with this crisis, now you have countries like Norway that are basically rolling back mandates. And I mean, at what point do we say no, government, we are now in charge of ourselves again. And we take back that authority that they really took from us during the COVID-19 pandemic. So yes, I’m thankful for the pilots for standing up for their freedoms. But I think the more important discussion we need to be having is what got us here in the first place.