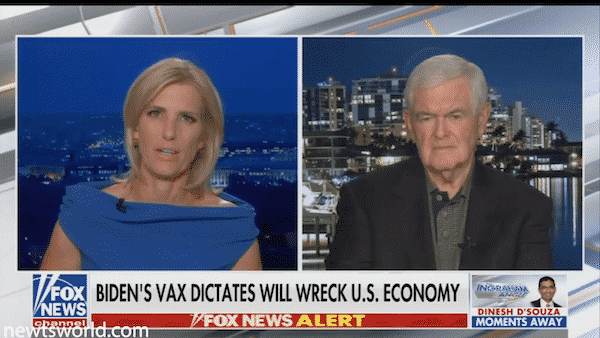 Newt give his thoughts on why Americans are waking up and resisting many of the outrageous policies from the radical left.

Look I think it’s deeper than the mandates. You have a system, the American system which is falling apart. You have hundreds of thousands of illegal immigrants and by the way, Joe Biden doesn’t do anything to apply his fancy rules and his mandates to illegal immigrants. They don’t get tested, they don’t get vaccinated, we don’t check on them for health reasons, so somehow American citizens can be punished by their own government but people who show up here illegally get flown around the country, get shipped around the country, get taken care of — the taxpayers are funding all the illegal immigrants who are not required to do any of this. But there’s something deeper going on, they can’t unload the ships, they can’t find the trucks, they can’t get the economy moving, they can’t get children educated. Go down the list. Their system, this entire big government socialist system is falling apart, and their answer of course is to use the power of the government against the American people. That’s why you have the attorney general trying to sick the FBI on parents who appear to a school board meeting. Not since the civil war have we seen this kind of intense, anti-citizen behavior. And this is happening because the left knows they are a distinct minority, they know the country is going to repudiate them and they are desperate to enforce on you and me and everybody else their rules. What’s beginning to happen is you just saw in Chicago as you saw with Southwest airline, people are starting to figure out there are more of us and there are of these left-wing nuts. I think you are going to see more and more resistance on every front, not just in terms of mandates.

When I hear Joe Biden talk about plans, I think first of all about the withdrawal from Afghanistan was a disaster. I think second of all whatever his plan is where Kamala Harris is absent without leave, is a disaster. I look at the 60 ships that are stuck off of Long Beach which is a disaster, they are already starting to warn us that the Joe Biden Christmas is going to be a very narrow, lean Christmas. You look at the price of meat which has gone up dramatically, the price of gasoline which has gone up dramatically, the number of jobs that are unfilled, the number of trucking companies that literally can’t find truckers. You look around and you think if this is the Joe Biden plan, it is a disaster. Let’s look at pragmatically, facts on the ground, not statements from the White House that have no connection to reality.

I think that is right in every single front, it’s right on the whole issue of racism, it’s right on the issue of law and order, it’s true in terms of abortion. We are going to have a healthy national debate on what is viability. The original Roe vs. Wade is totally obsolete now because it’s based on medicine that’s 40 years old and — 50 years old, it’s no longer true. I think this is going to be a period of time when the American people come to grips with themselves — what you find in the left is the big government socialists are a religious movement, a secular religious movement, they can’t deal with reality, they can’t cope with facts, if it doesn’t fit their narrative, they just shrug it off and refuse to pay attention to it. I want to go back to one thing I said earlier. If you’re an illegal immigrant, none of Joe Biden’s requirements apply to you. If you’re an American citizen he will use the power of the government to coerce you into losing your job. You can’t fly on an airplane. Why is it that Joe Biden is so pro illegal immigrant and anti-American citizen.