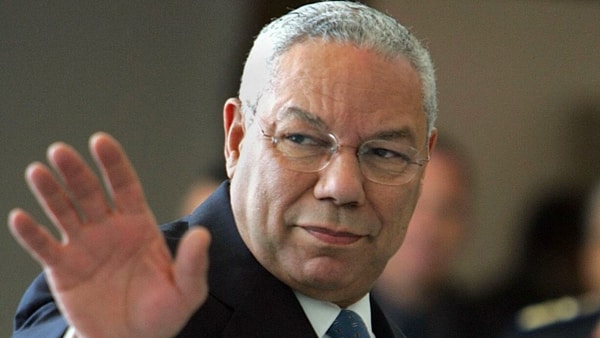 It was an enormous shock to learn that Colin Powell died at 84 of complications from COVID-19.

His devotion to duty, commitment to America, and innate sense of dignity and decency, made him seem ageless and timeless.

We live near the Powells in McLean, Virginia.  Our pictures hang side-by-side at Simon’s Shoe and Luggage Repair. As a four-star general, Secretary of State, and National Security Adviser, Powell wandered around town as a normal citizen. He greeted one and all with courtesy and kindness.

Every young American should learn about Gen. Powell’s life.

He was born in Harlem. His parents were immigrants from Jamaica. And they taught him to study, to be courteous, and to do his duty.

After graduating from City College of New York (the first free public school of higher education in the United States), Powell became a career Army officer. He joined Reserve Officers Training Corps (ROTC) while in college and found that he enjoyed the work, the structure, and the discipline. While he was a geology major, he rapidly focused on military education and rose steadily.

Every time we saw Gen. Powell, he personified dignity and friendliness. These personal traits served him well throughout his life, and especially during the Reagan years, when he served as Deputy National Security Adviser and National Security Adviser.  Gen. Powell had a practical, down to earth approach to asking questions, thinking through problems, and briefing the President and senior leadership.

When President George H. W. Bush, with whom he served in the Reagan White House, called on him as Chairman of the Joint Chiefs to design a decisive occupation of Panama, and to eliminate the Narco-dictatorship of Noriega, Powell responded with a commitment to overwhelming force and precision. The Panama operation was flawless and set the stage for the vastly bigger operation required to oust Saddam Hussein after he occupied Kuwait.

Gen. Powell’s finest military moment was the marshaling of forces and the education of the American news media (and through them the public). The briefings by Chairman Powell were amazing. He was knowledgeable, firm, and pleasant. But he had an austere military bearing that radiated reassurance. The campaign went even better than people expected. A 37-day air campaign so demoralized and disrupted Iraqi forces that the ground campaign lasted only four days.

The aftermath of the first Iraq War fit the heart of the Powell Doctrine – have limited goals, use overwhelming force, and be thoughtful about the post-war environment you want to create. America used this model in Panama and then in Iraq. Having deliberately limited goals was a key part of the Powell Doctrine and was clearly violated a decade later in both Afghanistan and Iraq.

Gen. Powell retired as the most widely-respected American military leader since Gens. Dwight Eisenhower and George Marshall. He was urged to run for president in both 1996 and 2000 but wisely decided it was not his calling. Instead, he helped others, in particular President George W. Bush.

The most controversial act of his long career came when he represented the United States at the United Nations Security Council and made the case that Hussein was developing weapons of mass destruction. There is no question that Secretary Powell believed the accusation. He had personally gone to the Central Intelligence Agency and reviewed the case. It seemed strong. It was wrong. That testimony was probably the greatest regret of his public career.

Gen. Powell will be missed by his family, friends, and fellow countrymen. He is one of those rare figures who is a genuine role model for future generations.