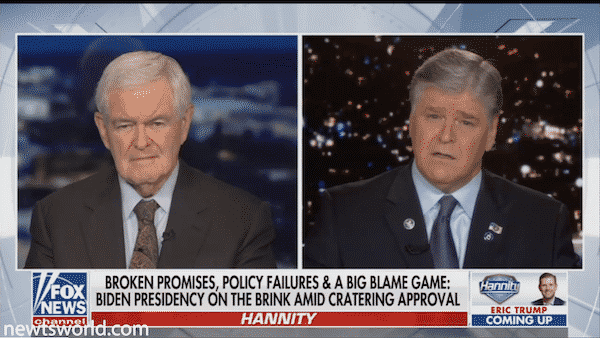 Newt discusses how President Biden and the Democratic party are choosing to reject reality as the U.S. collapses around them.

I mean, you do not know what Biden’s going to do because the fact is, they have to reject reality. They rejected reality in Afghanistan. They reject reality on the border. They reject reality with murderers who increase the murder rate in cities by 30%. There is no reason to believe that they’ll get any of this. The whole idea, first of all, the outrage that the American government would force people from their jobs, city governments would threaten to take away a pension right which is earned by 20 years of being on the street risking their lives in terms of policemen, the hypocrisy of not imposing it on the postal union not imposing this on the teacher union, this is a purely corrupt stunningly dishonest administration. With zero regard for the rule of law and it’s not going to last you might be right about Biden leaving three years from now but the reckoning’s going to come much faster than that because the American people are simply not going to put up with the level of pain and the level of incompetence that this modern big socialist, big government socialism represents. It’s true at every level. The city level, state level, federal level, they are producing a level of incompetence. I don’t that we have ever seen in America before.

First of all, the whole system is beginning to break down. That’s what you’re seeing the logistics of the supply chain. That’s what you’re seeing in terms of the fact that they are now saying heating in Maine might be more 50% more expensive this year. Somebody called me a little while ago and said they’ve never realized that they were making more than $400,000 a year. Because that must be the case now, because we want to fill their car up with gasoline, the dramatic Biden taxes so great that even though they make $70,000 per year, they are sure getting taxed like they were one of the rich people. Every place you turn, whether it is buying food, buying gasoline, heating your house, trying to get things for Christmas, or a friend told me a while ago, trying to order makeup for example. One-third of the things they tried to buy, the other day are literally not in stock and won’t be available. It’s almost like reading Atlas Shrugged and watching the system around you break down. Where the people who are supposed to be in charge do not have a clue. What you are seeing is city government, state government, federal government, if it’s under democratic control is waging war on the American people. Now, in a free society, if you do not have the soviet secret police or the gestapo or the Chinese secret police, if you have to do it in a free society, governments can’t wage war against their own people. In the end the whole system gets repudiated.

Well, comment that this is really an upper-class problem is a sign he is nuts. The supply chain problem — I said a while ago, starts to affect the supply of food, it’s affecting the supply of natural gas and oil, heating oil in Maine is going up dramatically. The fact is on the border, you can’t have 400,000 people coming across every month and not have a catastrophe. Noticed by the way; Biden is mad at the American people but this in mind if a couple hundred thousand illegal immigrants come in without COVID tests vaccinations.

You have an American president who favors illegal immigrants while punishing Americans. Now, that is not in the long run a sustainable formula. The American people are just plain going to rebel and I think the elections next year are going to be an annihilation for the Democratic party. Because they are so far off on the limb now, people can see how bad they are.