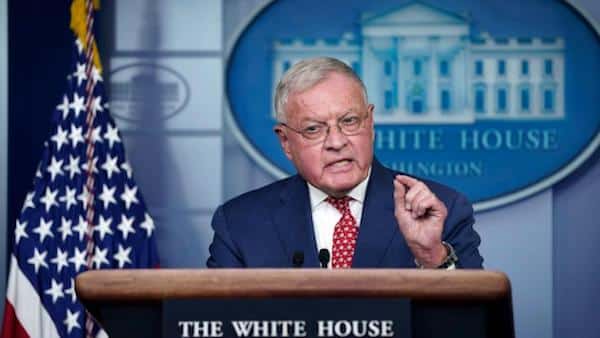 On Feb. 29, 2020, the U.S. and the Taliban signed the Doha Agreement, which set conditions for an American military withdrawal from Afghanistan. A few days later, then-President Donald Trump picked up the phone to call Taliban leader Abdul Ghani Baradar. On that call, Trump explained to Baradar in no uncertain terms that, if he and his men didn’t fulfill the agreement, which included a pledge not to attack U.S. forces, the Taliban would suffer dearly. Not a single U.S. soldier was killed in combat in Afghanistan for the rest of Trump’s presidency.
Retired Army Lt. Gen. Keith Kellogg was in the Oval Office when Trump called Baradar. Serving as a top national security official in the Trump White House, Kellogg wondered how the president’s words were being translated because his language was so strong and forceful. But that was precisely the point: To make clear to the Taliban’s leadership that they had to respect the U.S. and know the consequences should they lash out.
Trump’s call is just one of many stories that Kellogg recounted to me on a recent episode of my podcast, “Newt’s World,” while we discuss his new book, War by Other Means: A General in the Trump White House.
As Kellogg explained, President Joe Biden did not follow through on any discussions with the Taliban upon entering office. The Trump administration made clear the U.S. would maintain 2,500 troops and its air bases until the Taliban and the Afghan government engaged in peace talks and moved toward forming a functioning reconciliation government.But the Biden administration didn’t hold either the Taliban or the Afghan government sufficiently accountable to that agreement. And then, even worse, Biden just set an arbitrary date to leave.
What happened next was nothing short of a debacle — a complete, unmitigated disaster. The speed with which Afghanistan fell to the Taliban was especially shocking. But that’s what happens when morale breaks. We had designed an Afghan army that required American support, especially air power, and Biden pulled that support virtually overnight. Add the sight of the Afghan president fleeing the country with millions of dollars, and there was no will or ability to resist a committed foe.
This situation didn’t develop overnight, however. As Kellogg pointed out, we kept lying to ourselves about Afghanistan. Indeed, the military and political leadership repeatedly lied to the American people, telling them everything was fine and we knew why we were there. Just one more dollar, one more pint of blood and all would be well. It was all rubbish.
Perhaps more importantly, Kellogg describes how a biproduct of Afghanistan was America’s senior military leadership becoming highly politicized, forgetting their basic job is to deter violence and–if need be–win our nation’s wars. Many of the top generals, he argued, may even need to be replaced to start fresh, following George Marshall’s example from the early days of World War II.
Whether or not we need to clean house in the Pentagon, one thing is clear: Our military leadership is not functioning as well as it should be. But in the case of Afghanistan, the root of the problem isn’t the generals – it’s the decisions which came out of Biden’s White House and State Department.
Click Here to Listen to More Episodes of Newt’s World