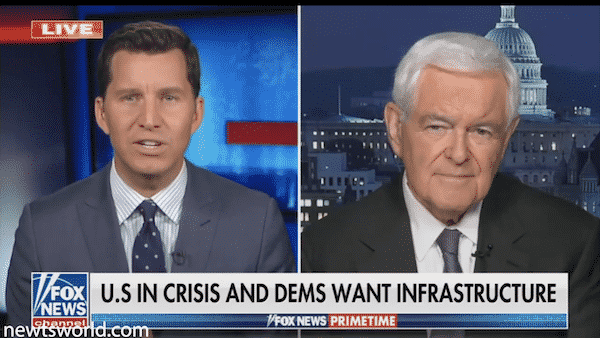 Newt talks about how the left is uninterested in the problems facing Americans today, as well as Secretary of Transportation Pete Buttigieg’s irresponsible decision to take time off.

That’s true across the board, they are uninterested in controlling the border, which is a huge issue for Americans, they are uninterested in the rise in murderers which is a big issue for Americans, you could go through the whole list of things. The Biden team which includes Schumer and Pelosi and virtual every Democrat in Washington except maybe Manchin and Sinema, the Biden team are committed to a hard left big government socialist model. They have to pay off the unions, that means they’ve got to pass big spending. They’ve got to find ways to take care of their allies and I think that you see them literally tone-deaf. I actually don’t have the language — and I’ve been working on this. These are people who reject reality. Reagan used to say he didn’t worry about what liberals didn’t know, he worried about what they knew that wasn’t true. Now I’m worried because even when it’s objectively obvious, they are flying children at night into Westchester County, New York, getting them out of Texas and I don’t think anybody knows where they’re going, what’s happening to them, and the White House is just totally out of touch with reality and frankly so is the democratic party in the house and the senate.

Well, you got in Pete Buttigieg somebody who took two months off on family leave leaving behind nobody in charge of the department of transportation as we drifted into a gigantic crisis of logistic with over 60 ships stuck off short from Long Beach for example, off of savanna come off of Los Angeles. So you can take a guy who was a total failure at solving one of the biggest economic problems we have right now and we are going to somehow magically make him the democratic nominee. I mean as a Republican, I think it’s terrific. As a matter — as a matter of reality, how can you take this guy who’s utterly irresponsibly and there’s a certain level where family leave doesn’t quite work if you are in charge of the whole country’s transportation system. And he didn’t leave anybody in charge. For two months we were rudderless had no one in charge and the entire logistics system got steadily worse as we are going to discover that Christmas.

They got lots of people. They’ve got senators, they got governors, they got movie stars. Somewhere out there in America there is someone better than Pete Buttigieg.