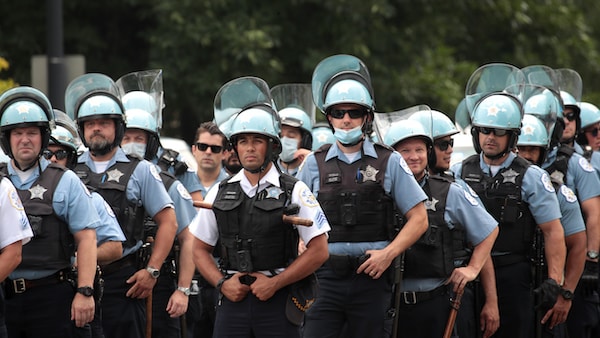 Police forces across the country are hemorrhaging due to COVID-19 vaccine mandates: What does this mean for the future of public safety?

As vaccine mandates sweep the nation, our men and women in blue are forced to make tough decisions. In Chicago, Los Angeles, and Baltimore (just to name a few), police are resisting vaccine mandates. This resistance means that cities across the nation risk the loss of one-third or more of their police forces.

In Chicago, approximately 4,500 employees of the Chicago Police Department have refused to disclose their vaccination statuses.

Employees of the Los Angeles Police Department filed a lawsuit in September opposing the city’s mandate as the December vaccine deadline is quickly approaching. Los Angeles County Sheriff Alex Villanueva said, “I don’t want to be in a position to lose 5[%], 10% of my workforce overnight,” and that he would not be responsible for acting as the city’s vaccine police, refusing to enforce the Los Angeles’ vaccine mandate.

In Baltimore, police union leader Sgt. Mike Mancuso wrote, “Until the city responds to our right to bargain these issues, or the courts intervene, I suggest you do nothing in regard to revealing your vaccination status, as it is outlined in the city’s policy.”

John Malcom, director of the Meese Center for Legal and Judicial Studies at The Heritage Foundation, said, “I would be more worried about murderers, rapists, and drug dealers acting with impunity than I would about a couple of police officers transmitting the virus…”

To read more about the hemorrhaging of police forces across the United States, head over to The Daily Signal.