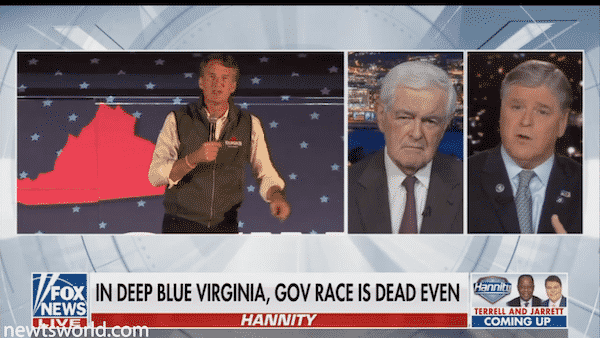 Newt previews the Youngkin versus McAuliffe gubernatorial race in Virginia and why it could spell trouble for Democrats should they lose.

The only thing that makes any sense is they are trying to mobilize their base which has been much more passive and less inclined to vote. They know if they can’t turnout the Democrats, this is over. They can’t compete. I agree with you. When the “New York Times” reported that Thanksgiving this year will be the most expensive dinner in American history, and you look at the gas prices, you look at inflation in general, you look at Biden’s failure to deliver. From my perspective you have Glenn Youngkin who is very much into Virginia issues, campaigning on things like the Loudoun County situation which when you are familiar with it is really horrible. A young girl was raped in the girl’s bathroom by a guy covered up by the board of education. And then the boy was transferred to a different school where he also harassed another girl. The judge found him guilty and put him in jail. All of that was done despite the school board. That’s where this whole fight started over fixing the school board. Loudoun county, which was I think earlier was more likely to be for the governor, I think now it will go for Youngkin. That’s a huge swing from where they have been. I actually think this could get down to the point where either Youngkin wins by a big margin, or it comes down to a very late count in Fairfax County which is the biggest county that will be voting. They already announced they will vote very late. It will be interesting to see if that’s like Fulton Georgia or whether the Youngkin lawyers are better able to stop any funny business. But right now, I would say Youngkin is on offense and the governor is on defense. I think this probably is still a purple state. It was drifting blue, but this administration is going to turn most of America red. I think Virginia is caught up in the same wave as most of the country outside of the really heavily unionized states like New York or California. Or even in New Jersey the last poll show Republicans are within 4 points of the democratic governor and that’s a very heavily unionized and traditionally very blue state.

Sure. I don’t believe in these kinds of artificial gains. In 1980 Jimmy Carter was a total disaster and I think Ted Cruz said it right when he said that Biden combines McGovern’s radicalism with Carter’s incompetence. And in 1980, Ronald Reagan won the biggest electoral victory against an incumbent president in modern history. You could never have projected that from 76 or 72 or 68, but the country gets to change. Even in northern Virginia — I live in McClain in Northern Virginia. You go to the local gas station, and you are stunned at how much more you are pay. And at the store I talked to somebody this afternoon who just paid more than twice as much for a chicken as they paid 3 months ago. If you are a normal everyday person, all of a sudden, the best phrase I think to describe the Democrats next year may end up being it ain’t working. It ain’t working on the border, it ain’t working with inflation, it ain’t working with energy. They get a 54% increase in heating costs in Maine this year they will be annihilated in the election next year in Maine. That’s just a fact, even though Maine is not necessarily a red state.

Oh, I can. Look, things change very dramatically. Remember in ’94 when you correctly pointed out you were the MC, we beat Ross Encouskee in downtown Chicago. We beat the chairman of the judiciary committee in the Houston suburbs. We beat speaker of the house Tom Foley in Spokane Washington. Nobody would have projected that. So, all I am saying is if you have the continued process and Youngkin has done a very good job of focusing on Virginia, it’s fascinating. The former governor who you’d assume really knows Virginia is spending all of his time on national issues, national politicians because he has nothing new to stay about Virginia. Youngkin is talking about parents having rights, he’s talking about creating jobs and about safety if places like Richmond where there was a lot of crime recently. He is actually down in the weeds where people live talking about Virginia. Meanwhile you have this desperate last-minute thing and frankly why you would have Kamala Harris do a video that was probably illegal for over 300 churches. If you are a black church, you are allowed to politic. If you are a white conservative church the Johnson amendment says you can’t politic. If you ever watch Kamala Harris the idea that she will convince anybody of anything is absurd. What they have done, they are drowning and bringing in the last piece of driftwood. The last two pieces were called Harris and Biden and that’s what they are driftwood.