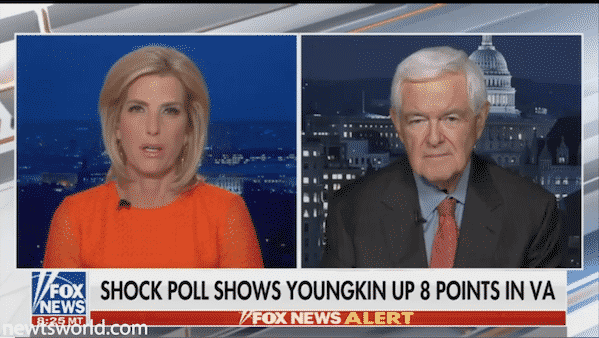 Newt details how Republicans must be more bold and aggressive in fighting for issues that matter for the American majority.

Oh, absolutely. It goes back to the development of the right to have school choice, which goes all the way back to Governor Tommy Thompson of Wisconsin in the 1980s has grown, and grown, and grown. Jeb Bush was a great leader on this in Florida and when DeSantis ran for governor against an African American candidate, he got one out of every five African American women who voted, voted for DeSantis. Because they wanted school choice. And they were tired of the government unions, they were tired of the government schools that were failing their children. And now in Virginia you have a vivid case study of this, because at a recent debate, governor McAuliffe you would think he knows better, said that he did not believe parents had a right to be involved in their children’s schools. And that went over so badly. To their credit, Glenn Youngkin and his campaign had an ad up the next morning pounding this home and communicating it to Virginians. In a poll that came out today, there’s 25-point shift among parents away from Terry McAuliffe towards Youngkin. It’s also true across the whole state on issues in general. And the McAuliffe strategy of trying to make this a national election as though it was a U.S. senate seat, bringing in Barack Obama, bringing in Biden, bringing in Kamala Harris, bringing in Stacey Abrams. Has totally backfired. Ironically, it is the governor who should’ve known a lot about Virginia trying to run a national campaign. It’s the business leader who is a reformer who is stuck very disciplined to state issues. Repealing the tax on food, cutting the tax of gasoline, creating jobs. Working on public safety. Taking on the left. Amazing moment.

I think it’s a lesson for Republicans everywhere. People care about children, people care about education, people know that the government employee unions and the government schools are not succeeding. I think if we were prepared to be more bold and more aggressive, we would be shocked how many — we just did a series of polls in a project I’m doing called the American Majority Project, and we found among African Americans a deep resentment of this effort by the left to eliminate grades, to eliminate quality, to eliminate programs of excellence, because they thought it was cheating their children. I think this issue could apply everywhere in the country and I think we will find out next Tuesday. But right now, at least if this Fox poll is accurate, which I’m told it is by some speed people in the Youngkin campaign, this is going to be huge shock to the democratic party in the country and to the news media because the margin is good to be much bigger than they expect.