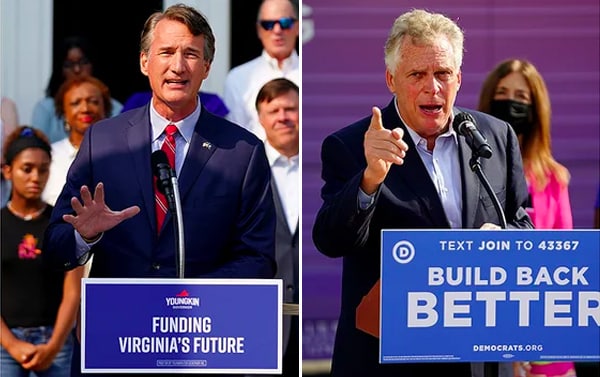 Virginia was supposed to be a solid blue state. However, Youngkin’s Virginia-oriented strategy seems to be growing and McAuliffe’s status quo national strategy seems to be fading away. This election has become a referendum on what direction the nation desires moving forward.

Virginia was supposed to be a solid blue state. Joe Biden carried it by 10 points. Since 2013, Democrats have won 13 straight statewide elections. Terry McAuliffe is a former governor who started this race with a massive name recognition advantage and presumably a substantial advantage in knowledge about state government.

Yet, today the race is too close to call. If McAuliffe does win, he will barely squeak through in a state the Democrat should be carrying handily.

And, of course, there is a distinctly real possibility (I would say a probability) that Glenn Youngkin will become the next governor of the Commonwealth of Virginia.

One of the things which has made this a fascinating election is the radical, almost diametrically opposed strategies of the two campaigns.

McAuliffe, who started the race with knowledge of the entire state, strangely decided that he had to beat Youngkin on national issues. He designed a campaign to solidify the blue vote which seemed to be moving toward an unbeatable majority. This might have initially been bad advice from lazy consultants, but McAuliffe has clearly stuck with it.

Youngkin entered the race knowing that his greatest strength would be local issues and local concerns. He has rejected the national rhetoric and focused continuously on Virginia issues and Virginia solutions.

McAuliffe’s biggest effort was to make Youngkin into Donald Trump. After all, in 2020 Biden beat Trump by more than 451,000 votes. So, the McAuliffe calculus was simple: Consolidate the anti-Trump vote, convince people Youngkin is a Trump clone, and win handily.

First, the core assumption isn’t believable. Youngkin is a business executive who is focused on state issues rather than national ones. In a U.S. Senate race in which national issues and national personalities really matter, perhaps the McAuliffe attacks would have more punch. In a gubernatorial race, people simply do not translate McAuliffe’s clearly political attack into a real argument. McAuliffe is now in the worst of all worlds. The Trump base rejects the attacks. The suburbanites who may have voted for Biden in 2020 are seeing inflation, the border crisis, and other policy failures associated with national Democrats – and now McAuliffe – and are turned off. Youngkin’s practical, problem-solving approach is simply more comforting than McAuliffe’s name calling. You can tell all this by the number of Youngkin signs in suburban Fairfax County (whose massive Democratic majority is the keystone of the McAuliffe strategy).

Second, most of Youngkin’s conversations have been about positive steps to improve Virginia’s economy and the lives of Virginians. Youngkin’s ads have been about policy proposals that stick with voters: getting rid of the grocery tax, suspending Virginia’s recent gas tax hike, and addressing the high cost of living by doubling the standard deduction for state income tax. At a time of inflation, the Youngkin plan has practical appeal. It feels personal rather than political. By contrast, McAuliffe’s nationalized campaign seems tone deaf and status quo. Ironically, McAuliffe failed to make Youngkin into Trump, and he succeeded in making his own campaign into Biden (who is at record-low approval).

Finally, McAuliffe made a huge mistake in a debate and said he did not think parents have a say over school curricula. Youngkin’s team was able to get an ad up within 12 hours. Since that final debate on Sept 28, Youngkin’s ads have focused on McAuliffe’s statement. This comment supercharged the already ensuing debate in Northern Virginia over closed schools, critical race theory, transgender policy, ending accelerated math classes in the name of equity, and the new race-based admissions policy at Thomas Jefferson High School.

The recent stories that the Loudoun County School Board just plain lied about the rape of a high school girl in the girl’s bathroom by a boy in a skirt only increased the anger. Now, a new story indicates McAuliffe’s former law firm has been representing the Fairfax County School Board against a 12-year-old girl who claims to have been gang raped on a middle school campus.

The parents and students vs. the school bureaucrats theme is working to Youngkin’s advantage and is keeping McAuliffe on defense.