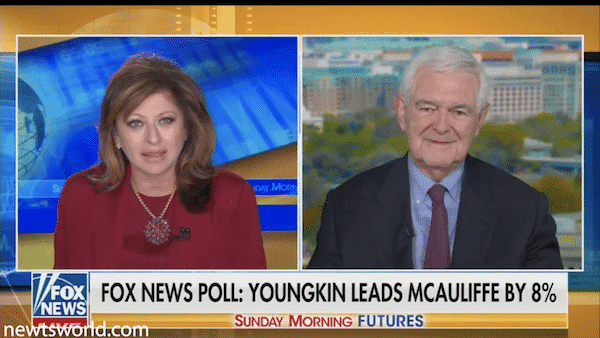 Newt shares why he thinks Republicans will prevail in Virginia’s gubernatorial race and why all concerned Americans should read his new book, “Beyond Biden.”

Well, if Youngkin wins, which I think he will, I suspect Republicans will replay Kamala’s comments over and over again. Because she said basically if Youngkin wins it means a disaster for the democrats in 22 and 24. I happen to think she’s right, there will be a disaster because they’re too far to the left they are spending too much money, and they’re too alienated from the American people. Something which Selena Zito wrote a brilliant column on this morning; that they just don’t get it. I saw this yesterday, I was watching Georgia win over Florida — sorry to say that to my Florida friends — but I watched a lot of commercials for both Terry McAuliffe and for Glenn Youngkin, and what was fascinating was McAuliffe’s commercials are very political. Glenn Youngkin’s talking about real life. He’s talking about jobs, he’s talking about children, he’s talking about safety, he’s talking about schools. So, the difference in the two commercials, the sets of commercials I saw about 12 or 14 of them was remarkable, and I think partially explains why McAuliffe is losing. He’s lost in a world of fantasy that really matters to the left-wing Democrats but doesn’t matter to the average Virginian.

That’s what I mean. No matter how blue you are as a Democrat, the green you’re paying at the gas station — I filled up my truck yesterday, and it was $79. Calista filled up her car the day before, and it was $72. We’re looking at that and thinking, this ain’t working. And I think that send them a message is going to be a big factor both in New Jersey, by the way, which is much closer than the public polls and in Virginia where I think Youngkin is pulling away. And I think that McAuliffe had the disadvantage of reality coming out. So, after he makes his really bad comment that parents shouldn’t be involved in education, you suddenly have the Loudoun County school board turns out to be liars, turns out that they knew about the rape of the young girl in the girls’ room by a guy in a dress. They transferred the guy to another school where he then assaulted another girl, and they have internal messages that have now become public where they clearly knew all this while they lied to the public and they lied to the parents about it. All of that undermines McAuliffe. And you saw the poll numbers shift very dramatically as the school, the violence in the schools became bigger, McAuliffe went down.

Well, look, I think, that first of all, big government socialists don’t realize that there are only about 1 out of every 6 Americans. They get together in their own little caucus, and they pump each other up, and it’s like a cheerleading session. But the truth is in the country at large as people face higher and higher prices, overwhelmingly Americans think these big spending bills are bad. And as Senator Rand Paul pointed out the bill only gets to a lower number by lying. It says, oh, this is only going to be for one year. Well, the scoring process is ten years. Everybody understands that the stuff they want to do the first year they’re going to keep doing. So, the whole bill is a lie, and I’m not sure she can get the votes on Tuesday. She’s failed every time she’s tried, and it may be that this one more downer for the Democrats in Virginia.

Right. Well, I think that got knocked down, and the governor refused to go along, to his credit. But I think what you’re going to see, my biggest fear is Fairfax County which has already announced it’s going to report late, it’s the biggest single voting county in the state. I watched in Georgia as Fulton County was clearly corrupted and cast votes that were clearly illegal, and I worry a great deal about Fairfax although I’ve been told by the Youngkin campaign that they have a number of lawyers already on the site, already deeply monitoring it. But if I were worried about losing the election to fraud, I’d start with Fairfax, I’d go to the city of Richmond, one or two counties down along the coast. There are only about four places and I frankly, think McAuliffe is fading so badly that probably is not stealable. There is a point where the margin gets too big you just can’t do it. And if that’s what happens, you’ll see that the counties return earlier and more honestly. They’re only going to attempt to steal it if it’s only because it’s dangerous. And these guys can go to jail for the kinds of things they’re trying to do.

Well, we have a project called the American majority project, and we’re really trying to find ways to bring the American people together. We found, for example, that free-market capitalism beats big government socialism by about 59-16. We found when you talk about the content of your character versus the color of your skin, the reverend martin Luther king’s formula, gets a 91-6 approval, people care about the content of your character. So “Beyond Biden” starts with the premise this is like the Jimmy Carter years which were followed by Ronald Reagan and a generation of booming economy. I think Biden is a one-term president, I think they’re all going to collapse. I think Kamala Harris was right, Virginia’s the signal to the future. The signal’s going to be for Republicans. For Republicans, by the way, like Youngkin who offer real solutions about real life and go beyond just political ideological language. And I think there’s a real opportunity in ’22 and ’24 and “Beyond Biden” is a series of chapters explaining what we can do in education, what we can do in the economy, what we can do in national security, what we can do with crime where we know from Giuliani and chief Bratton how to control crime. They did it brilliantly in New York. And every left-wing Democrat has thrown away the book, and it has led to a huge rise in murder rates. So “Beyond Biden” is a book for everybody who’s concerned about the country.

It just doesn’t work. I think that’ll be the slogan for ’22 and ’24. You watch Kamala Harris and you know that it’s true.