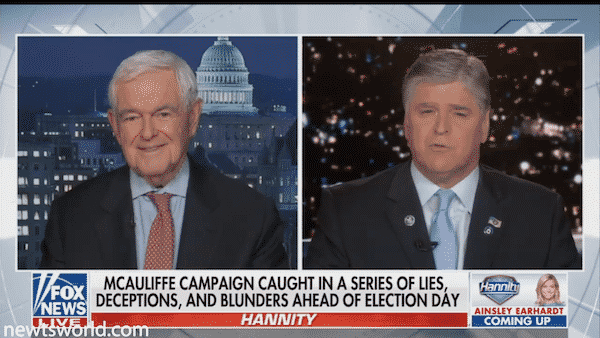 Newt shares why a Glenn Youngkin victory in Virginia is America’s first step towards moving beyond Joe Biden and into a brighter future.

Well, in a sense, Glenn Youngkin’s campaign fits the book Beyond Biden because it’s a positive campaign, it’s a solution-oriented campaign. It didn’t focus negatively. It focused positively on the kind of Virginia that Youngkin would like to help create. I do want to make one comment about something you said. The most racist single comment in this entire campaign was McAuliffe saying there are too many white teachers. I mean, talk about breaking down, forgetting the content of your character. Let’s go straight for the color of your skin. How can somebody run for governor basically complaining on a racial basis not that they are competent or incompetent, not that they work hard, or they are lazy, but they happen to be white, and I think it just tells you the depth of fear that in order to pander to the African American vote, he made that statement which I think is an incredibly racist comment. By contrast, I think it’s been a fascinating campaign. Youngkin decided he was going to run a Virginia campaign focusing on Virginia issues and then McAuliffe made this crazy comment in the debate that he didn’t want parents to be involved in schools. That began to eat him up and then the school system — the Loudoun County school system turned out that they had actually lied to the parents about a girl who was raped in the girls room by a guy in a dress and by the way that guy was transferred to a different school without telling them about his problems and he attacked another girl in a different school. So, people felt that the whole system was lying to them, and I think brilliantly, the Youngkin team had an ad up less than 12 hours after McAuliffe made this mistake and they had been pounding away. Education in the last poll is the number one issue in Virginia, more than the economy, and both of those, frankly, hurt McAuliffe. I think you’re going to have — as you put it pretty well, this is the first beyond Biden election, if the outcome occurs the way we think it will, for governor or lieutenant governor or attorney general and assembly, this is going to be a very historic moment tomorrow night.

First of all, if it’s really tight they will steal it, so you can’t afford to have a really tight election so you have to win by a big enough margin that they can’t steal it. Second, the difference — if Youngkin wins, I think you will if everybody turns out to vote tomorrow, if Youngkin wins, this is an earthquake. If Youngkin almost wins it’s an interesting tremor, but it’s not going to shake things up. I thought — and I hope that Republican national committee has already lined up a commercial because Kamala Harris comes into Virginia and says you know, if Youngkin wins, that tells you we are going to lose in ’22 and we are going to ’24. If he does win, and they think it will, I hope that by Thursday we have an ad that says Kamala Harris was right, Youngkin won, goodbye Democrats in ’22 and ‘24. I think they will panic. I think most of the socialist big government program is going to actually be stopped in its tracks and you’re going to see the Democrats in the congress start fighting each other and in a real sense of fear because this is the beginning of a title wave. And by the way, I’m really glad you have the Republican candidate of New Jersey on. Because that race suddenly become much closer than we thought it would be and he has a real shot at winning.