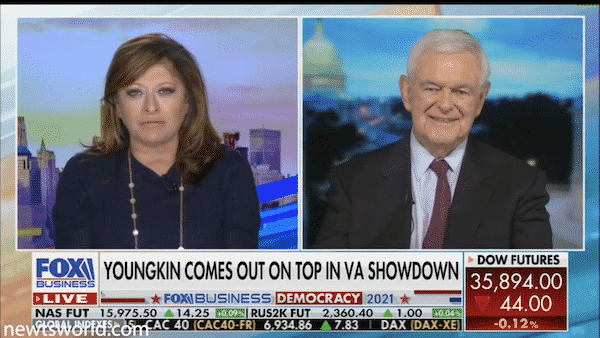 Newt shares why Glenn Youngkin’s campaign for governor was so successful and why focusing on real issues matters to voters.

First of all, having been through a lot of these races, I will feel better when I see the first actual results as opposed to the polls. I think Youngkin is probably going to win but we will find out. I saw a brilliant contrast of strategies really worth studying. You had McAuliffe who had been governor and knows Virginia well deciding he has to have a national strategy because he has to beat Youngkin based on the national patterns. And you saw Youngkin say I’m going to run a state-focused strategy. And the two of them are totally different campaigns. And then McAuliffe made the mistake of saying parents shouldn’t be involved in schools. And that was probably the break point of the campaign. I think if, in fact, Youngkin wins a significant victory, it will have started that the debate with that mistake by McAuliffe.

One of the things I don’t think any of us fully appreciated is that the very well-educated voter who tended to vote for Biden and against Trump, is also the voter who cares the most about their children’s education. And so, when you get into the suburbs and you start getting into things as we saw with Loudoun County and Fairfax County, all of the sudden it’s the very — it will be fascinating to see what it looks like when we get the actual votes. But I thought like the thousand people who showed up in Loudoun County over the school issue, many of those would normally have been Democrats. But they are now so frightened about their child’s future that as parents, they are probably voting for Youngkin, and the Youngkin people have been very smart. The number of signs Calista and I saw today when we went to vote parents for Youngkin. That’s a very smart, cuts across all party lines. Parents identify as parents. A lot more than they identify as partisans.

I think that would not have defeated McAuliffe. And, again, I want to see the votes before I talk too confidently although I do think Youngkin is going to win. But I think that the mistakes made by McAuliffe. The electrifying moment when he said parents shouldn’t have a role in schools, and the Youngkin people were good enough that within 12 hours they had a commercial up that had just had McAuliffe and people looked at that and thought well, that’s crazy. And then this weekend, and as somebody who has studied politics a long time and practiced it a fair amount. I couldn’t understand why he would say there are too many white teachers because it’s a racist comment. And it’s also misunderstands northern Virginia. Northern Virginia is not just black and white. I mean it’s Korean, it’s Vietnamese, it’s Chinese. It’s Latino. We have complicated world out there. I think we want good teachers of any background not bad teachers of any background.

I think if it’s a very close race, and about 3:00 in the morning McAuliffe magically finds five extra precincts, then I think you are going to have a huge backlash across the whole country. I think, you know, I have always had the position you have to win big enough they can’t steal it the burden on any Republican is to never get to a close race if you can avoid it. I think probably Youngkin will do that. He is a very attractive personality. He clearly has been having more and more fun. I watched him and I watched various places going. You see them dancing, you see him see him laughing.

I think. So, and I think — I personally believe people like politicians that they like, and I think that McAuliffe is a very smart guy and a great professional politician for over 40 years. McAuliffe looked worried and scared and a little angry. And he was — somebody said today I think maybe the post or the “New York Times” that he had run a dark campaign. Attacking about January 6th. Attacking about Trump. And so forth. And Youngkin increasingly was running a happy campaign. And I think as a general rule in American politics, happiness beats darkness when you get into these kind of races. Again, I am going to be watching you as you go and start the count. I think it’s going to be a fairly long evening. And by the we should mention at the national level, the New Jersey race has closed substantially. It’s going to be interesting. The Minneapolis vote on abolishing the police department in the middle of a crime wave is going to be a very interesting test. There are a lot of interesting things going on out there.