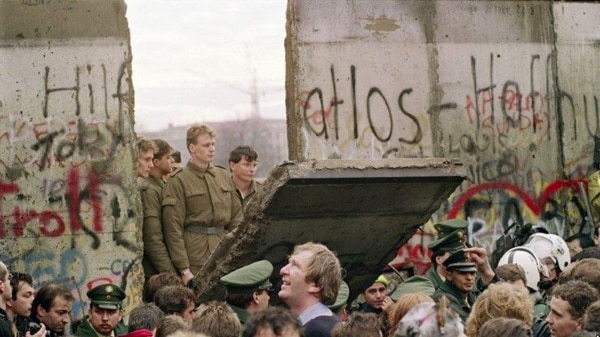 Originally published by the Weekly Standard on November 8, 2009

Twenty years ago, on November 9, 1989, the most visible symbol of totalitarian evil, the Berlin Wall, tumbled down. Two years later, the Soviet Union officially dissolved on Christmas Day 1991. The fall of the Wall and the dissolution of the Soviet Union transpired in relative calm, but they followed decades of repression, cruelty, and murder by the Soviet regime.

The trumpet blasts that finally destroyed the Berlin Wall in a peaceful revolution and brought freedom to millions in Eastern Europe were political, economic, diplomatic, and military in character. But it became evident to us in working on our new documentary, Nine Days that Changed the World, that spiritual factors were decisive, as Pope John Paul II and President Ronald Reagan rallied the West to a defense of freedom and human dignity.

Everyone recalls that President Reagan, in front of Berlin’s Brandenburg Gate, famously called upon Soviet General Secretary Mikhail Gorbachev to “tear down this wall.” But rarely does the media take note of the most important passage from Reagan’s 1987 Berlin Wall speech, in which he described the “root of the matter” and the “fundamental distinction between East and West.” Said Reagan: “The totalitarian world produces backwardness because it does such violence to the spirit, thwarting the human impulse to create, to enjoy, to worship.”

Reagan then went on to ridicule how “[t]he totalitarian world finds even symbols of love and of worship an affront.” He pointed to the frantic behavior of the Communist East German government to correct with paints and chemicals what they found to be a major flaw in the glass sphere of the massive communications towers they built in 1969. Reagan noted that these actions were to no avail, as “even today when the sun strikes that sphere–that sphere that towers over all Berlin–the light makes the sign of the cross.”

On the same day, 220 miles away on the peninsula of Westerplatte, near Gdansk, Pope John Paul II was once again rallying his countrymen and women to a heroic defense of truth and human values amidst life under totalitarianism. In the very place where World War II began when a vastly outnumbered garrison of 182 Polish soldiers held out for a week against a surprise attack of 3,500 elite German troops, the Pope said to the young people assembled: “Each of you, my young friends, finds in life some personal ‘Westerplatte.’ Some measure of tasks that have to be undertaken and fulfilled. Some rightful cause for which one cannot avoid fighting. Some duty, necessity, which one cannot shun. One cannot desert. Finally–some order of truth and values, which must be held and defended, like this Westerplatte, within oneself and around oneself.”

In a place remembered for Polish heroism, the Pope recalled the reflections of a Polish martyr of the concentration camps: “More horrifying than a defeat of arms is the defeat of the human spirit.”

While June 1987 would ultimately prove to be the final stage of the Cold War, Reagan and the Pope had been stressing the primacy of the spiritual struggle against Communism since each took office. In his 1981 Notre Dame commencement address, four months into his presidency, Reagan issued this rallying cry: “For the West, for America, the time has come to dare to show to the world that our civilized ideas, our traditions, our values, are not–like the ideology and war machine of totalitarian societies–just a facade of strength. It is time for the world to know our intellectual and spiritual values are rooted in the source of all strength, a belief in a Supreme Being, and a law higher than our own.”

In his “Evil Empire” speech in 1983, Reagan said, “I’ve always maintained that the struggle now going on for the world will never be decided by bombs or rockets, by armies or military might. The real crisis we face today is a spiritual one; at root, it is a test of moral will and faith. . . . I believe we shall rise to the challenge. . . . I believe this because the source of our strength in the quest for human freedom is not material, but spiritual. And because it knows no limitation, it must terrify and ultimately triumph over those who would enslave their fellow man.”

From his election in October 1978, Pope John Paul II constantly preached that it was only through Jesus Christ that man could fully understand his great dignity and his future vocation and therefore no country had the right to exclude Christ from its history. When the Pope preached this message in June 1979 in Warsaw’s Victory Square, on an altar with the backdrop of a 50-foot cross, one million of his fellow Poles responded in affirmation with 14 minutes of applause, interrupted by singing in one voice: Christus Vincit, Christus Regnat, Christus Imperat (Christ Conquers, Christ Reigns, Christ Governs). In an officially atheistic country, the Polish people dramatically bore witness that God was sovereign, not the state.

At the end of the same homily, Pope John Paul II prayerfully called on God to “send down your Spirit and renew the face of the earth”–adding after a dramatic pause–“and the face of this land.”

Thirty years later, in June 2009, the Mayor of Warsaw–in the presence of the President of Poland, a company of soldiers, the Archbishop of Warsaw, and thousands assembled–dedicated a 30-foot cross in the same square in memorial of the 1979 Mass and described the impact of Pope John Paul’s prayer for the renewal of Poland in this way:

The message of John Paul II met with our highest national and social aspirations. It poured hope into our hearts. Then for the first time in decades we saw how many of us are here. We felt what it meant to be together, free and in community. Soon, August 1980 arrived and Solidarity was established. Then the tragedy [martial law] of December 1981, and thanks to those who went through that and did not reject hope, June 1989 arrived. The word was fulfilled. . . . We Poles know that the demolition of Communism did not start in 1989, but ten years earlier, here on this square, with the words of John Paul II. . . . This Cross is a symbol that what is impossible becomes possible.

As we remember in gratitude the demise of the Berlin Wall and the defeat of Soviet Communism, let us also remember that when human freedom and dignity were under assault during the Cold War, Pope John Paul II and President Ronald Reagan were in agreement that the spiritual nature of man and the freedom to know God were central to defining humanity and decisive in defeating tyranny.