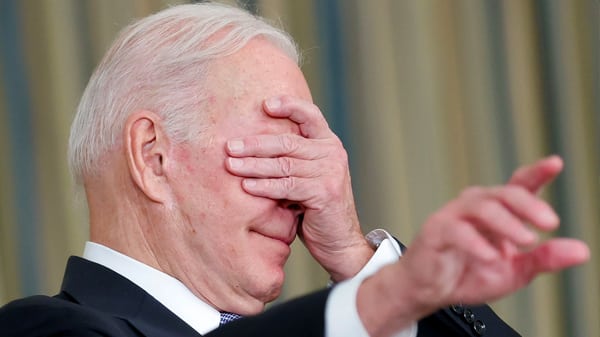 The latest job approval polls indicate, President Biden (38 percent) and Vice President Harris (28 percent) have learned nothing from last week’s elections. I predict these ratings will get steadily worse.

The Democratic Party defeat last Tuesday was followed by an even more ominous report on the job approval of the two leading Democrats.

Now, an even more ominous indicator has hit the Democrats nationally.

If the Biden-Harris team stay in the polling basement, it will have a devastating effect on the Democrats in 2022. I think you could end up with House Republicans gaining 40 to 70 seats (a reasonable sweep based on the experiences of 1994 and 2010). At the same time, Senate Republicans may find themselves with four additional members and a real opportunity for Sen. Joe Manchin to switch parties and join the rest of West Virginia in becoming Republican.

The initial evidence is that the Democrats learned nothing from their repudiation last week.

Washington Democrats and their news media and lobbyist-donor friends seem to have gathered together to reassure one another that passing legislation will cure everything. It is a tribute to how Washington-centered the Democrats have become that they believe the pain of the grassroots can be solved by passing texts in Washington which will have no significant impact for years – although many Americans may experience immediate negative impacts economically, philosophically, or culturally.

Democrats in Washington seem to have managed to ignore the larger realities that dwarf legislative achievements.

When people fill up their gas tanks ($72 for my wife Callista, $79 for me at latest fill up) they get angry at the Biden administration’s failure. When they hear he closed the Keystone XL Pipeline but asked Russia and Saudi Arabia to pump more oil, they wonder why he favors foreign jobs over American jobs. When they hear now that the Biden administration is considering closing a pipeline in Michigan, they wonder on what planet the Washington Democrats are living. When Secretary of Energy Jennifer Granholm laughs when asked if she has a plan to counter rising oil prices, it just further angers the people paying the costs.

With personal costs being hammered by Biden’s policies, imagine how Americans feel when they hear Biden say he believes we should compensate people in the country illegally for being separated from their children. Every American who is arrested is separated from their children without compensation. But Biden is worried about noncitizens who decided to come here illegally. Americans overwhelmingly want the border controlled and oppose paying people for breaking the law.

The Pentagon worries more about being woke than doing its job in Afghanistan or China. The Teachers Unions help convince the Biden administration to focus the FBI on parents in school board meetings. Most Americans think the FBI should focus on agents of influence, spies, terrorists and the dramatic rise in murders in our biggest Democrat-run cities. Having the FBI investigate parents is the kind of thinking that defeated Terry McAuliffe in Virginia. As Republicans become the party of parents and students, and the Democrats are clearly owned by Randi Weingarten and the teachers unions on behalf of government schools, the political implications are enormous. Just ask Virginia Democrats or those who just witnessed the school board revolts in Colorado, Pennsylvania, Texas, and elsewhere.

Of course, as bad as President Biden is, Vice President Harris is much worse. She may be the least effective person ever to serve as vice president. Her performances with paid child actors on building enthusiasm about space travel was humiliating. Her total failure on the border is unforgivable. She will be an even bigger liability than President Biden.

These two approval ratings, 38 percent and 28 percent, mark the beginning of a political disaster for Democrats, which I predict will get steadily worse for four years.