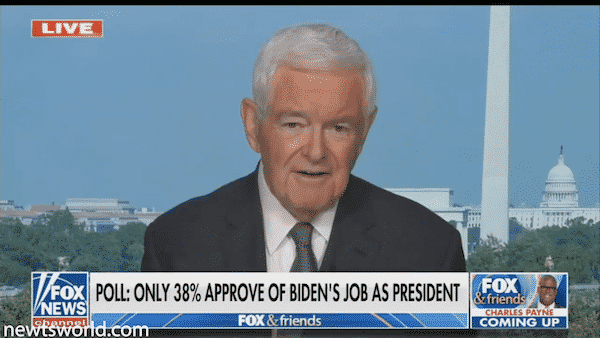 Newt discusses with the panel why Democrats are stuck with their message of Big Government Socialism even as it proves to be unpopular.

Well, look, there are so many things going wrong from failing to control the border to announcing last week that he is willing to pay hundreds of thousands of dollars to illegal immigrants, which most Americans think is insane. To taking 85 cars to a global summit on climate where he then promptly falls asleep in public. There’s just lots of different things going wrong. The biggest of which I think is the price increases and I don’t care what they say and do in Washington, you know, when people go out and fill up their car and it costs 75, 80, $85 in California over $100, they know something is not working. And I think the greatest problem Biden has isn’t ideology, it’s the sense that it ain’t working. And if that sinks in, then you will hear a lot more than chants, you are going to hear a lot of people just say flatly I’m going to vote Democrat to send them a signal.

Well, look, I mean, without being too unkind, she is an absurdity. You ask her a question, she giggles. She goes to make a tape in favor of children in space, they hire child actors. And frankly, if you watch the video, she is not convincing, and neither are the child actors. She is in charge of the southern border so; she doesn’t go do anything. I think people have the sense that somehow, she was picked as a mistake and I do — it’s fascinating to me, by the way, more people now are opposed to Biden running in 2024 than are opposed to Trump running. And I suspect in a head on race now that Trump would beat Biden. That’s really a remarkable change in 8 or 9 months. And tells you how much political capital that Biden has used up. It’s not just Biden, it’s Schumer, it’s Pelosi. You know, Schumer endorsed the socialist candidate in Buffalo, New York for mayor who lost. The three big election reform things designed to make it easier to steal an election were all repudiated by New York voters by 63%. Each one got 63% no. Schumer continues to push for it. Against his own state. You look at the results last week, they weren’t just Virginia and New Jersey. Go look at Seattle where a Republican won the county attorney’s race. If you told me we would begin to pick up seats in Seattle, I either thought it was very, very unlikely. Look at San Antonio where in 73% Latino district the Republican won. The truth is big government socialism doesn’t work. It is very unpopular, only about one sixth of the country favors it. And the Democrats are stuck with it.