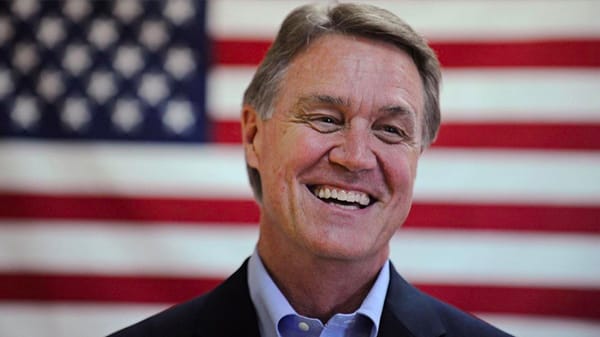 The closest parallel Georgia has to Glenn Youngkin is David Perdue. Like Youngkin, Perdue can bring together the Trump base and those Republicans, independents, and moderate Democrats who will find Stacey Abrams too radical.

Two recent analyses have convinced me that Georgians needs a unifier who can help lead the state to a better future.

I began working as a volunteer in the Georgia Republican Party in 1960 (it was virtually non-existent). After five decades of helping Georgia and the Georgia GOP, I have a deep interest in, and commitment to, a better future for the state and the party.

In one possible future, Stacey Abrams could win the general election as a deeply committed Big Government Socialist, who has been anointed by the national Democratic Party as its candidate. She would be charged with doing to Georgia what Joe Biden, Chuck Schumer and Nancy Pelosi are trying to do to Washington. That future has higher taxes, bigger bureaucracies, more gun control, and more radical education for Georgia’s children – including Critical Race Theory and the 1619 Project’s leftwing rewriting of American history.

An Abrams governorship would violate the beliefs of most Georgians and lead to continuous fighting with the state legislature over fundamental values. Furthermore, Abrams is being pulled to the left by her national ambitions. As the Atlanta Journal-Constitution reported:

“‘Stacey has a plan, and it’s only a surprise to people who haven’t paid attention,’ says an adviser who asked not to be identified to speak freely about her thinking. ‘She plans to become the first Black woman governor in the United States next year. And then run for president in 2024 if Biden does not, or in 2028 if he does.’”

Unfortunately, a second term for Gov. Brian Kemp will be equally divisive. His long war with former President Donald Trump has deeply divided the Republican Party and all conservatives. Instead of trying to reconcile with the former president and his million-plus supporters in Georgia, Kemp has followed a policy of ruthlessly purging Trump supporters and trying to move to the center at the expense of the majority of the Republican Party.

The result of the Kemp decision to double down on his fight with President Trump has destroyed the governor’s ability to win a general election – even if Kemp somehow won the primary, he would almost certainly lose in November.

While Gov. Kemp can use the power of the governor’s office to line up a wide range of elected officials, his failure to reach out to the Trump base simply guarantees a fight between the elected officials and the people. Most Georgia conservatives will not pay attention to politicians telling them what to do.

Sadly, Gov. Kemp’s decision to prolong and intensify his fight with the most popular leader in the Georgia GOP (Trump) has virtually guaranteed that a Kemp nomination will lead to an Abrams governorship – and all the fighting and alienation that kind of radical administration would bring with it.

You don’t have to take my word for the danger of an Abrams governorship coming from a Kemp candidacy in the general election. I asked for analyses from the two best pollsters working in Georgia.

Robert Cahaly, whose Trafalgar polls were the most accurate in 2020, wrote to me “[Kemp] has to get the confidence of a third of the Republican base back to win in the fall.”

Matt Towery, whose Insider Advantage polls rival Trafalgar in accuracy, expanded on the problem for Gov. Kemp and for all Georgia Republicans. He wrote to me:

“The difficulty for the GOP in Georgia is that there is a resolute and significant amount of the Trump base that will not vote for Brian Kemp in a General Election. This makes a Kemp victory against a credible African-American Democrat problematic and may well hinder the success of even a popular nominee for the Senate, such as Herschel Walker. Mid-term elections are all about turnout. And in Georgia, having an anti-Trump persona bleeds over to other candidates with that base. Suburban voters who voted Biden will flip on the issues, but the hardcore Trump base will stay resolute.”

By comparison with Kemp’s divisive strategy, we have just watched the vision of a unified future win an amazing victory in Virginia.

Glenn Youngkin, a business executive, took on 40-year veteran politician and former governor, Terry McAuliffe. Youngkin ran an issue-oriented campaign focused on a better future for all Virginians. He reached out to non-traditional groups from the beginning of the campaign. He beat McAuliffe (for whom Stacey Abrams campaigned) and he helped elect Virginia’s first African American woman lieutenant governor, Winsome Sears. Sears came from Jamaica at age six, served in the U.S. Marine Corps, and is a formidable advocate of patriotism and a unified America. The Youngkin tide also helped elect Jason Miyares, the son of Cuban refugees, as the first Latino attorney general in the state. It was hard for the leftwing activists and media to brand a ticket with a white executive, an African American woman, and a Latino man as somehow racist. This unified ticket also won back control of the Virginia House of Delegates and set the stage for an aggressive reform governor.

Youngkin won in part because he managed to bring together the Trump base in rural Virginia (which gave him enormous margins of up to 81 percent in some counties) and the suburban parents who were upset about closed schools and radical left-wing theories being used to indoctrinate their children. He also attracted support from a wide range of minority voters who were motivated by concern over failing education, rising crime, and growing inflation. It was the desire for unity and a better future which led to victory.

Perdue is the one candidate who can defeat Abrams and help Georgia avoid Critical Race Theory indoctrination, the teaching of the left’s radical version of history in the 1619 project, and the higher taxes and bigger bureaucracy which would be devastating to Georgia’s economic future.