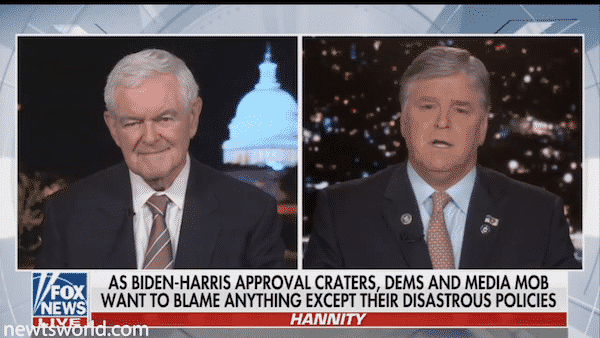 Newt gives his thoughts on Kamala Harris’ inability to lead as vice president and why the left’s radical playbook will not work.

The playbook is never going to work. Big government socialism doesn’t work. We are now seeing what I think Ted Cruz correctly called a combination of Jimmy Carter’s incompetence with McGovern’s radicalism. But Kamala Harris is a unique example. Try to describe Kamala Harris without mentioning her laugh is to miss the whole point. She’s not likeable. Allen Silken who works pulled together the 2 laughs tonight. We will release it tomorrow at Gingrich360. We will give you Kamala Harris and then you Granholm. She starts laughing because somebody says what is your plan to lower the price of gasoline. And she starts laughing, and you remember because you did it, we launched drill here drill now pay less. I authored a book on gasoline at 2.50, Obama tax economy because the left wants really high prices. And Granholm can’t say with a straight face what she will do except they may might close the pipeline in Michigan which brings in oil from Canada which provides I think 60% of the gasoline for the state of Michigan which would further raise the prices. It would be madness. Kamala Harris doesn’t know anything. Doesn’t do anything. Has a terrible laugh. And is about as inauthentic. When she did the NASA children should love space and it turned out the children were paid actors. If you can’t do a freebie with little kids about space, you shouldn’t be in the business, you should go back to California.

Well, one of the weirdest moments of my speakership was sitting behind Clinton at the state of the union when he said the era of big government is over. Of course, you have to stand and applauds. In Biden’s case it would not matter, and it would have no effect on policy.