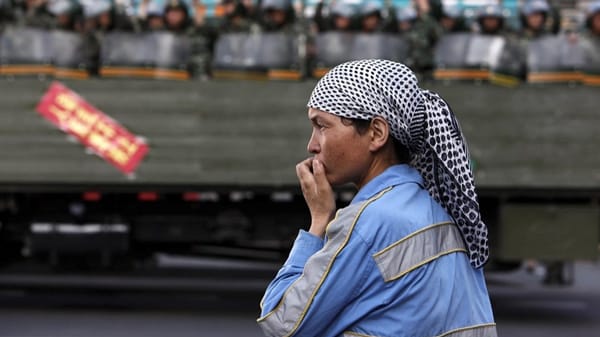 Following the recent passage of the infrastructure bill, attention in Congress has shifted toward the $1.75 trillion Democrat spending package, the Build Back Better Act.

While much of the focus on this bill has been its enormous price tag and concerns regarding government overreach, Americans should not overlook what has been removed from the bill during negotiations and the implications that such political concessions will have.

A previous version of the spending package included a measure that prohibited the National Science Foundation – which funds research that strengthens U.S. leadership and competitiveness in science, technology, engineering, and mathematics – from providing funding to entities that are known to be involved in the Chinese Communist Party’s (CCP) genocide in Xinjiang.

Under the legislation, the National Science Foundation is set to receive an additional $11 billion in funding.  However, an earlier draft of the Build Back Better Act contained a ban on any of these taxpayer dollars being allocated in the form of a contract, subcontract, grant, or loan, to entities that are complicit in mass surveillance or the construction of concentration camps in Xinjiang.  Entities that would have fallen under this prohibition would have been named in a report to Congress that is mandated by the Uyghur Human Rights Policy Act of 2020 from the Director of National Intelligence.

But now, this important provision is nowhere to be found in the current legislation.

As American Foreign Policy Council fellow in Indo-Pacific studies Michael Sobolik said, the measure “would prevent funds from Build Back Better from going to entities the director of national intelligence assesses are involved in Uyghur camp construction and surveillance in Xinjiang. That should be a no-brainer.”

It is puzzling why this provision would be removed, especially considering the overwhelming bipartisan opposition to the Chinese Communist Party’s genocide in Xinjiang.

In June 2020, the Uyghur Human Rights Policy Act of 2020, which established the guardrails of the omitted provision, was signed into law.  The Uyghur Human Rights Policy Act passed unanimously in the Senate and in the House with a vote of 413-1. Furthermore, in January 2021, former Secretary of State Mike Pompeo determined that genocide and crimes against humanity were being perpetrated in Xinjiang.  The Biden administration later upheld this determination.

The measure’s removal was not an error of omission that can be attributed to a simple oversight.  Rather, it was intentionally added and intentionally removed.

Based on reporting by the National Review, it appears as though what should have been a “no-brainer” bipartisan measure has been caught in the crossfire of political and corporate interests.  Communist China has repeatedly demanded that the United States “stop interference in the affairs of…Xinjiang” which the CCP has claimed is an internal matter.

As the National Review wrote, “The revelation that the…provision had been stripped from the reconciliation package follows multiple reports that U.S. climate envoy John Kerry urged members of Congress to block another Uyghur-human-rights bill, the Uyghur Forced Labor Prevention Act, from getting a vote. Kerry has sought to engage the Chinese government on a cooperative approach to reducing carbon emissions.”

This follows a broader effort among corporations with business interests in Communist China lobbying against tougher measures opposing the CCP’s egregious human rights abuses.  Politico reported that groups have been working to pressure Congress to “pump the brakes on anti-China provisions and prioritize climate change cooperation with Beijing.”

Additionally, citing a House staffer, the National Review reported that the provision may have been removed “in response to outreach from business interests, including the solar-panel industry.”

Members of Congress need to get to the bottom of why this important provision was removed from the Build Back Better Act. Although the measure in question is a small fraction of the more than 2,000-page bill, its inclusion will send a clear message to Beijing that the United States is committed to upholding human rights and stands firmly in opposition to genocide.