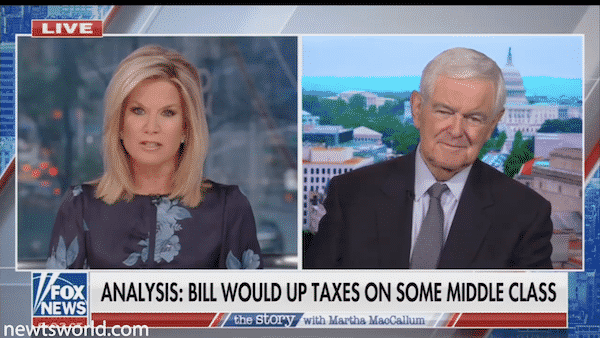 Newt reveals the reality behind the recently passed infrastructure bill and why the Biden administration is so out of touch with the country.

Well, first of all, Biden can say anything he wants to. He doesn’t have any relationship to reality. The fact is when you give for example $50 billion in this bill to Amtrak with no reforms, all you’re doing is throwing money into a system that needs to be modernized and there’s no pressure in the bill to do it. When you throw billions into New York City with no reforms, you’ll going to build the most expensive structures in history. Makes Chuck Schumer happy and it makes the construction worker union happy, but it won’t lead to better infrastructure. We desperately need deep reforms of our bureaucracies of the length of time it takes for us to do things. None of that was in this bill. We have to recognize, these are people who believe if you throw more and more money into broken structures, something is going to work. What it means, of course, you’re going to have more and more expensive failures. I think it’s important to recognize that leading Democrats have come out and said more spending in an inflationary environment is just going to increase the pressure for more inflation. So, people who already are finding food costs going up, rent going up, gasoline going up, there’s nothing in this bill that will bring that down despite the president’s nice words.

Well, look, the Democrats are paying off their billionaire allies. They’re under huge pressure from Democrats in New York, California, and New Jersey because those states are getting hammered because the high taxes used to be sheltered behind federal deductibility. When the Republicans took away that deductibility, the billionaires realize how much they were paying for local government taxes. So, it’s a big break for the very wealthy. I think up to $90,000 per person. Compare that to what the average person will get. More deeply, inflation is a tax. Inflation is a function of the government putting more money in to the system than there are goods and services. So, the Biden inflation tax, so if you buy a car, if you buy food, if you pay rent, if you pay for gasoline, if you try to heat your house this winter, Joe Biden has raised the cost of living for you. In fact, the real income of Americans dropped by over 1% over the last year because wages are not going up as fast as inflation. So anybody who lives a real life, may be a joke to people hiding in the white house or a joke to the secretary of energy that broke up laughing when she was asked what her plan is to lower the cost of gasoline, but remember, there’s a fight underway right now to close the largest pipeline in to Michigan which carries I think 60% of the gasoline used in Michigan, plus some gasoline for Indiana and Ohio. If they close that pipeline and further raise the price of gasoline, people are going to think they’re crazy. Totally out of touch with normal everyday Americans.