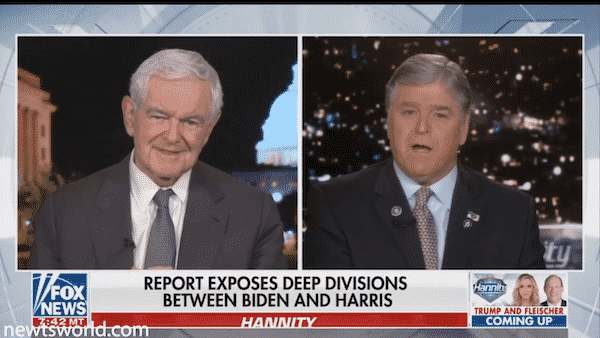 Newt discusses the low approval ratings of President Biden and Vice President Harris and how they are alienating themselves from Americans.

By the way there is a website that has 10 hours of Kamala Harris laughing. Taken from all these various speeches and interviews. 10 hours. If you want to punish a friend, make them watch it. It gives you a sign of what is happening to her. Being the laughing vice-president is not a good thing if that’s one of your most famous accomplishments. I think she accomplished something very historic. She got CNN historically the strongest support of liberal Democrats to run an entire story pointing out that the president’s team and the vice-president’s team are fighting internally in a ferocious way. I have never seen CNN do anything that would be harmful to Joe Biden. This story was devastating. And I think it starts with a simple fact. Biden is at 38% approval. She is at 28% approval. Powerful people wake up and go it can’t be me. I wonder who is doing this. The Biden people say it’s Harris’s fault and Harris’s people say if only he was using her correctly. I think you are going to see more of this back biting because the truth is she hasn’t accomplished anything. It’s an embarrassment. But then on the other hand she is working with Joe Biden who accomplished almost nothing and it’s an embarrassment. And as you point out just watching him in public in a non-scripted environment, it’s a little frightening frankly. To think this the commander-in-chief and to know that our opponents around on the planet are watching the same TV coverage. I think to me, having known a fair amount of vice presidents, this is an amazing moment for probably the worst vice-president in American history.

Well, there is no evidence right now that they will dig themselves out. As you know a major liberal publication just released a poll which shows the Republicans ahead by 10 points in the ballot, the largest lead they had in 40 years! 40 years. That poll understates how bad it is. Because it over-sampled Democrats and under-sampled Republicans. But the fact is they’re not going to turn around inflation, they don’t believe in closing the border. They don’t believe in stopping crime. Sit it’s going to keep going up. They don’t believe in it taking any steps to stop inflation. And frankly the idea that Buttigieg who has no experience is going to solve the logistics problem is crazy. So you are going to have more Americans angry. Every day when Americans fill up their car or truck, they get madder at Biden and Harris. And I think Harris suffers more because she is not as well-known and frankly have her laughing when the rest of us are suffering further alienates her from most Americans. If you’re not a hard core liberal, you have alienated yourself from Harris. I think basically ended any chance she will be president.

I assumed Jennifer was an imitator of Kamala Harris. That the new thing for liberal democrats is to learn to laugh at the nation’s problems.