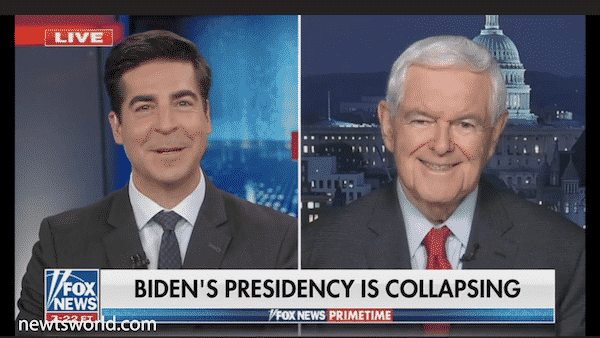 Newt explains to Jesse Watters how Biden’s hypocritical lack of empathy for Americans suffering from inflation and more could lead to a 2024 loss.

Well, first of all, you now know why I wrote “Beyond Biden” instead of writing anti-Biden because is he doing such a great job of being the leading anti-Biden in the country. A couple things I thought about it and first of all it is sad and it’s a little frightening that the commander-in-chief, the guy in charge of nuclear weapons and who represents America, and the world looks this confused, weak, feeble, uncertain, falls asleep at an international conference on climate, think about what that says all of our competitors around the world and to all of our allies. Second, what makes it even more frightening is, the person behind him is Kamala Harris. And she is so bad there is actually a website that has 10 hours of her laughing taken from various TV appearances. So, you know, you can’t switch to her. And it’s very clear that he will be a one-term president. And it’s pretty clear, I think, that with every passing month, he gets a little bit weaker. The last thing you showed by the way was I think just yesterday where he and Kamala trying to prove that the CNN report that they were fighting was false came dancing out to the rose garden literally arm in arm, chatting together as though this was some springtime movie for teenagers. And looking totally inauthentic. You couldn’t stage these things to look more inauthentic than they did.

Well, first of all, if you watch him, you realize he can’t remember where he is. He can’t remember what’s about to happen. How can he be expected to communicate caring? I mean, he can’t even communicate where he’s standing. But second, I think, unless something really dramatic changes, they are in for possibly the worst defeat by the democratic party, maybe since 1920. You see this yesterday, for example, in South Carolina. They had towns that had never gone Republican electing Republicans. They had towns with Biden had carried by huge margins had in one short year switched to electing Republicans. We just had a Democrat in south Texas state legislature switch parties and the elections two weeks ago were amazing across the whole country from Seattle to San Antonio to Virginia to New Jersey. You know, when a truck driver who spends $2,300 beats the state senate president in New Jersey, you know that people are walking in and saying not them. Now, if that happens across the whole country, you are going to see four or five senate seats and 40 to 70 house seats go Republican.