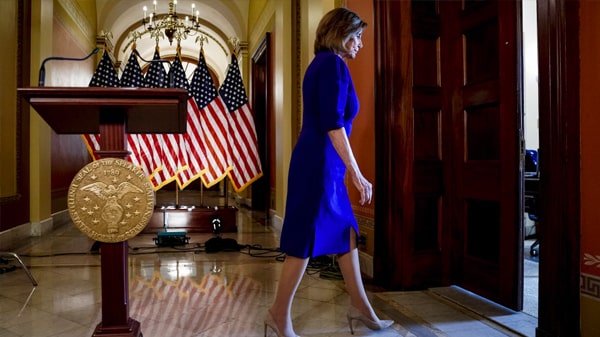 Democrats have now had three weeks of tsunami warnings, and the Nancy Pelosi dictatorship seems determined to force through trillions of dollars of additional spending and a host of radical woke policies – even though the American people are screaming, “no!”

Big earthquakes offshore in Alaska or Chile lead Hawaiians and other Pacific Islanders to worry about tsunamis coming from thousands of miles away. People take precautions. They move to higher ground. Faced with a real threat, Hawaiians prepare to make major changes to survive.

Apparently, Hawaiians are more interested in survival than Washington Democrats.

Democrats have now had three weeks of tsunami warnings, and the Nancy Pelosi dictatorship seems determined to force through trillions of dollars of additional spending and a host of radical woke policies – even though the American people are screaming, “no!”

Big government socialism and woke radical policies – and incompetence on issues such as inflation, crime, controlling the border, leaving Afghanistan, and solving logistics problems – are all adding up to an easily repudiated mess. Fed up Americans have a simple battle cry: “It just doesn’t work.”

You may think I am exaggerating about a tsunami-like anti-Democrat wave, but consider recent evidence.

On Nov. 2 Glenn Youngkin led an entire team to victory in Virginia. The team included Lieutenant Governor Winsome Sears, a Jamaica-born naturalized citizen who served in the U.S. Marine Corps and loves America. It also included Attorney General Jason Miyares, the son of Cuban refugees who escaped the oppression of communism. This diverse, impressive Republican team swept Virginia and carried with it a new Republican majority in the legislature. For Pelosi and the Democrats, this was earthquake No. 1.

A few miles north, in New Jersey, Ed Durr Jr., an independent truck driver, defeated New Jersey State Senate President Stephen Sweeney in one of the biggest upsets in modern politics. Durr spent only $2,300. Clearly, the voters were saying: “not Sweeney.” Consider that Sweeney got almost 59 percent of the vote four years earlier. This was earthquake No. 2.

On the opposite side of the country, in Seattle, a Republican won the city attorney’s race for the first time in more than 30 years.

In a state legislative special election in San Antonio, Texas, a Republican won in a 73 percent Latino district.

A few days later Democratic Texas State Legislator Ryan Guillen switched parties, saying: “After much consideration and prayer with my family, I feel that my fiscally conservative, pro-business, and pro-life values are no longer in-step with the Democrat Party of today, and I am proudly running as a Republican to represent House District 31.”

This week in South Carolina, Republicans had solid victories in municipal elections. In Georgetown, Carol Jayroe became the first Republican ever elected mayor. In Columbia, Republican Daniel Rickenmann was elected mayor in a county that went 68 percent for Biden.

Nationally, the polling has been increasingly bad for Democrats. A generic ballot is a question of whether you are more likely to vote for one party or the other.

“The 13-point edge for Republicans in the latest poll is larger than Democrats enjoyed at any time during the 2018 midterm campaign, due both to greater GOP partisan intensity and a wide advantage among independents. While 89% of Republican voters say they would vote for their own party’s candidate, only 77% of Democrats would vote for the Democratic candidate. Among voters not affiliated with either major party, 48% would vote Republican and 26% would vote Democrats, with another 17% undecided.”

In less than two weeks, the generic ballot has moved against the Democrats in every poll. But, of course, in the Pelosi dictatorship none of these results in real elections or polls have had any impact. Democrats seem more worried about being kneecapped by Dictator Pelosi today than being thrown out by voters next year.

Furthermore, the threat to all Democrats is compounded with President Biden at 38 percent approval and Vice President Harris down to 28 percent approval. (And anyone who listens to the 10 hours of her laughing will understand that she is likely to go even lower when her supporters hear how whacked she sounds).

The power of the emerging anti-Democrat tsunami coming this early creates huge problems for the Democratic Party. The scale of the tsunami will encourage Democrats to retire (note Sen. Patrick Leahy announced his retirement just this week). We will have to see if Sens. Joe Manchin and Kyrsten Sinema can withstand the psychological pressure of their radical members and the constant harassment of left-wing activists invading bathrooms, surrounding cars and boats, etc.

Still, with the tide receding, Pelosi charges toward the beach – and the lemmings (replacing the donkey as the symbol of the Democratic Party) march in lockstep behind her, toward the coming tsunami.