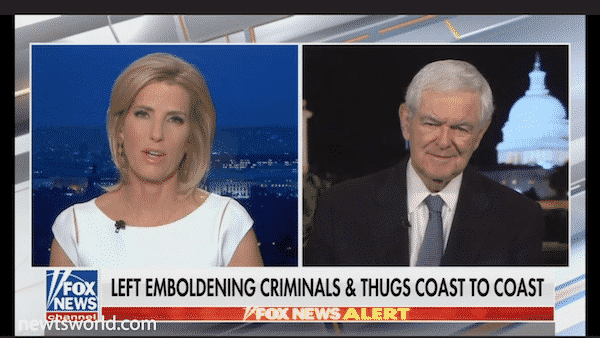 Newt explains how current Democratic policies towards crime and violence are creating a crisis for our civilization.

Look I think ff you wanted to undermine and destroy America you could hardly, do more effectively than what George Soros and Joe Biden have done — you are showing us now examples that are predictable. When you have a communist district attorney; he is openly a communist in San Francisco who says he not going to enforce the law. He not going to punish criminals. What do you think will happen? You are sending a signal to every would-be thug in the city: go ahead and do what you want to do. On one occasion there were up to 80 people at a time looting a store. Now if you are a normal citizen who just using common sense, it won’t take long to figure out if all your stores are looted. Civilization is collapsing. At the same time, you have this it tragedy in Waukesha, which actually resembles what happened in France about a year and a half ago. Where you have somebody in a truck runs downs and kills 5 people and wounds 40 people. We will hear all of the explanations he did. The truth is that’s a massacre and the person who did it should be treated as a terrorist who is willing to kill Americans on that scale. Across the country, whether you are in New York or you are in Wisconsin or Chicago or San Francisco, you have a growing sense that America is just stupid, open, and easy to steal from and easy to beat up. So, the thugs come out of the woodwork. And until we are prepared to turn around and say, you do stuff like this, you not going to be on the street for a very long time, we will continue to have this problem. This is a crisis of our civilization.

And remember, if you are not releasing prisoners from jail, you are letting in a million, 400,000 illegal immigrants with no record of their COVID and no record of their criminal backgrounds. You have a whole system where build back better back American better bill creates America as a sanctuary country giving people excuses to stay here no matter what crime they commits. And you know my personal view is if we took 20% of the people crossing the border, put them in Nantucket and took everybody out of federal prison under Talib’s model and put them in similar places across the country, so as long as you are a part of the billionaire-pro-democrat class, you got to have next door neighbors of that caliber, you will find these policies would change in 48 hours. It’s the poor who get hurt. The middle class pays for it. The very, very rich just hide in their sanctuaries surrounded by private security.