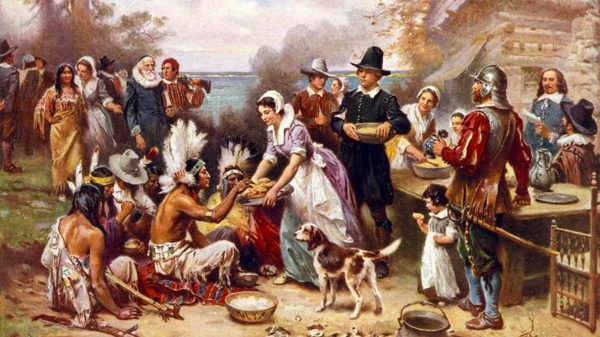 More than 401 years ago, courageous pilgrims set sail across the Atlantic Ocean on the Mayflower to start a new life in North America.  They arrived at Plymouth on November 11, 1620, after a dangerous crossing and founded a new settlement where they could practice their faith freely.

In Plymouth, these pilgrims agreed on how this new settlement would be governed. Their historic covenant began, “In the name of God, Amen.” Today, we know this agreement as the Mayflower Compact.

In November 1621, the newly arrived pilgrims and the Wampanoag people gathered at Plymouth for a harvest celebration, in thanks for having survived the brutal winter – an event regarded as America’s “first Thanksgiving.”

Our earliest evidence of this comes from the journal of pilgrim William Bradford, who wrote of a “great store of wild turkeys” which were shared between the pilgrims and the Native Americans who lived in the Plymouth Rock area.

The first National Day of Thanksgiving was recommended by the first Congress on September 28, 1789 and pronounced by President George Washington a few days later.

Thanksgiving as we know it today was established and signed into law by President Franklin Delano Roosevelt in 1941.

Since the autumn of 1621, this tremendous act of faith has been repeated by millions who have come to America to join and participate in this incredible experiment in freedom and opportunity.

Despite many challenges, we remain blessed to live in the freest, strongest, and most prosperous nation on earth. We have so much for which to be thankful.

We wish you a happy and blessed Thanksgiving!