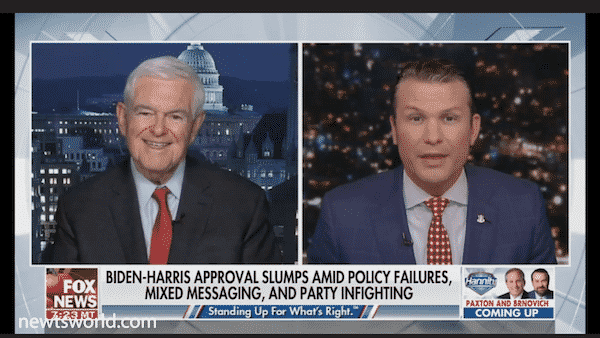 Newt discusses the plain incompetence of the Biden administration and the mainstream media’s propaganda that supports its radical agenda.

I think you are dealing with a semi-religious belief system. Big government socialism has its own internal logic. They don’t think very far ahead. In a world where you need to be able to play 4-dimensional chess to be a leader at that level, they can barely play tic-tac-toe. As a result, you saw with the secretary of energy when asked about is her plan broke out laughing like Kamala Harris. When asked a very basic question how much oil does the U.S. consume in a day? She had no idea. I mean it’s clear if you had an administration that was competent, she would be gone. But since this administration is incompetent in virtually every area, she is just one more example of the team. The team is incompetent at the border, it was incompetent trying to get out of Afghanistan, it’s incompetent with inflation. Why would you expect her to be any more competent than the rest of the team? Hillary Clinton represents the sour grapes of the past and also the classic democratic view. She has no idea how the world really works. She has no idea how to be honest about these things. Because if she was honest, she would have to say when Biden is at 38% and Kamala Harris at 28%, I saw one study today there are only 6 states in the country where Biden has a net positive. 6 states in the entire country. The fact is that big government socialism doesn’t work. They can’t say that because it’s a belief system. You’re dealing with basically a secular religion. And so They simply shrug all the evidence off and think it can’t be true. This guy who clearly was a criminal, clearly should have been locked up, was deliberately killing people. Their media, the propaganda media of the left, it’s not even a news media they can’t even report that he killed people. It becomes this sort of strange accident that happened. If you read the initial reports, it’s bizarre. By the way that’s what the “New York Times” did with Stalin in the 1930s and Castro in the early 1960s. This tradition of lying about the left is nothing new. It has a very deep lineage in places like the “New York Times.” It just spread over the past 50 years. It used to be a handful of newsrooms now it’s just the entire journalistic enterprise. The average American doesn’t know what is going on unless they watch fox or listen to talk radio. They’re not going to get it out of the news media.