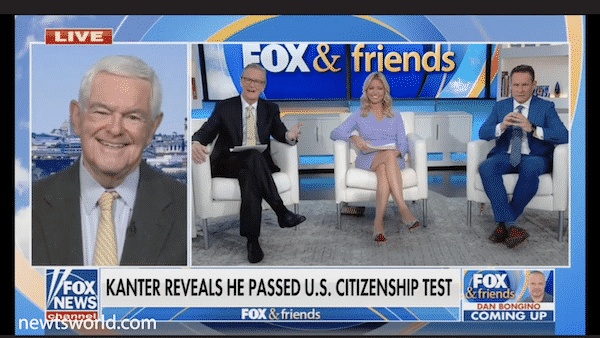 Newt reacts to Enes Kanter Freedom’s recent U.S. citizenship and why Americans should side with him to oppose China’s human rights violations.

I do, too. First of all, you can tell he probably won’t be invited to the Biden white house because he actually came in legally followed all the rules and ultimately earned his citizenship. He is clearly not acceptable to the Democratic party having done all the wrong things like being a legal citizen and he is clearly committed to freedom. Frankly, if you watch the tragedy of what Erdogan has been doing in Turkey turning it from a modern open society with the rule of law into a dictatorship drifting very rapidly towards Islamism extremism. You can sympathize with his commitment to freedom which he applies as much to his native country of Turkey as he applies to the U.S. I also think his opposition to China and his willingness to tell the truth about the Chinese dictatorship is a very, very important milestone and it will be interesting to see how the NBA and billionaire owners react to somebody who actually stands up for freedom rather than for profit from Beijing.

Look, first of all, prostitution doesn’t always involve sex and it doesn’t involve small amounts of money. So, you have billionaires willing to prostitute themselves to a dictatorship as long as they take home a big enough paycheck. Everybody who watching by the way should get Meranda Divine’s new book Laptop from Hell. It looks at the entire Hunter Biden story based on his own emails from the laptop which the FBI got and strangely has never followed up on. It’s a remarkable story and it’s the same story, methodical effort by the Chinese dictatorship to take over countries. And in this case exploiting with what was then the son of the vice president, now the son of the president. It’s a story of absolute corruption. And it’s a great problem in America because our elites have become corrupted to such a degree that having this conversation would be impossible in a number of networks because their owners wouldn’t tolerate it.