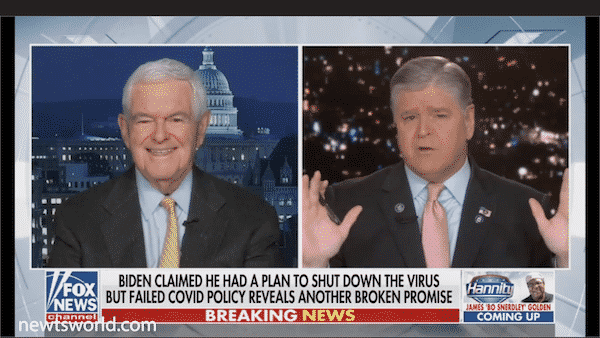 Newt discusses the continual lies being told by the Biden administration and how they are weakening the United States as a nation.

You have to remember that whatever the cognitive situation is for Biden himself, he has brought in so many left-wing big government socialists all throughout the government. And their policies are so bad that it’s almost inconceivable that they can turn this around right now. The fact is that big government socialism doesn’t work. You see it every day on the border. You see it every day in inflation. You see it every day in energy policy. As you pointed out earlier, Afghanistan remains I think one of the most embarrassing moments in American international history. I never thought I would see an American government abandon American citizens the way the Biden administration has. So, I think this is going to continue to get worse. The most amazing thing to me as a former speaker of the house is that Nancy Pelosi, with a very tiny majority, is getting these people to walk off the cliff week after week, Rassesmin just reporting that almost every single item you test inside this build back better bill that the warden at school says is about a $4.7 trillion bill if you were honest about it. The American public when they learn the details on almost every front, they are opposed to it. And yet she gets these Democrats to walk straight off the cliff. It is an amazing performance. And It’s bad for the country. It will be extraordinarily disastrous for the Democrats. I think you’re going to have the next speaker of the house on in just a few minutes in Kevin McCarthy. Partly because he’s doing a great job and partly because he is faced with a catastrophe on the other side. I will say, by the way, I prefer Biden sleeping in an international conference to Kamala Harris laughing. So, if you got to choose between those two, I think we are still — we are less threatened by Biden and then we would be by Harris.

Remember, if you are a big government socialist, which all these people are, you have to lie. Because if you tell the truth, you look like a total idiot. How does Biden get up and say yes, you are right. I’ve totally screwed up the energy policy. You’re going to pay for it at the gas pump for the next few years. You are going to pay for it in Maine and Minnesota this winter because the prices are going to go up over 50% to heat your house. You are going to pay for it in lost jobs. You can’t walk out and say that. So, they lie. They can’t tell you the truth about a million 400,000 illegal immigrants, none of them checked for COVID, none of them checked for criminal records. So, they lie. You just go right down the list and the reason they lie is simple. If they tell the truth, they are going to be wiped out. And what they don’t realize is the average American is smart enough, you go and you start pumping gasoline and you look at the price you go, I got it. Joe Biden might not get it. Kamala Harris may not get it. Nancy Pelosi may not get it. But the average American who is actually doing it, who is not in a government-funded car, the average American right now understands these policies do not work. And that is the biggest problem.

I believe that we need a national debate about the genuine threat that communist China can beat us. I think this is a real threat. This is not politics, this is history. And nothing would further stop us from recovering from Biden then having the Chinese communist dominate and defeat us militarily. It is a very real possibility. Just remember, the guys who couldn’t get out of Afghanistan are now the guys who are relying on protect us against China. That makes me very uncomfortable