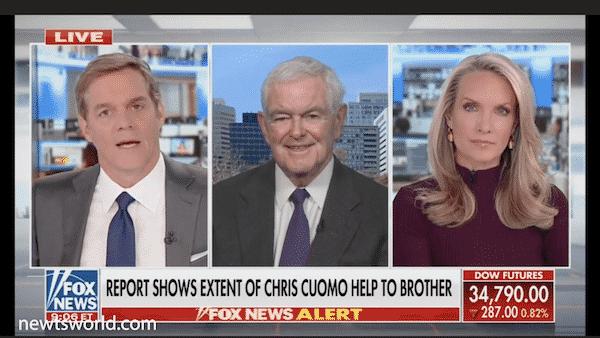 Newt talks about the many false narratives that Democrats seek to push for their own gain and how mainstream media is helping them.

Well, who knows in the modern world where Hunter Biden’s laptop doesn’t really exist, and Hillary Clinton’s 32,000 emails erased didn’t really exist. Who knows what is going to happen? The fact is by any reasonable journalistic standard Chris Cuomo has to go. First of all because he lied to his viewers. If he said to his viewers, look I’m doing everything I can to help my brother, he is my brother and I’m going to recuse myself on air and not talk about my brother and you all know I have a bias he would be fine. And the fact that he happened to use every asset he had to help his brother would be fine. I think the clincher is he directly lied to the viewers on CNN, and I think it’s pretty hard for CNN to tolerate that and keep him on. Again, senior management of these big corporations make lots of decisions that you and I would be surprised by.

Well, I just listened on “Fox & Friends” to a small businessman in Portland, Oregon, who has changed all his plans. Is putting all of his new investments outside of the state of Oregon and said walking into the studio this morning he passed two people on the street who were injecting drugs. That he has no interest in staying around a drug-ridden, crime-ridden area that he feels, that he has been robbed three times in the last month. So, I think you are going to see everyday people respond aggressively. I think crime will become a bigger and bigger issue because it directly threatens all of us. When you see these flash mobs that rush into stores, 80 people, semi organized looting a store, I suspect people will say they want prosecutors who prosecute. They want policemen who police, and they are tired of being told that our sympathy for the criminal has to be greater than our sympathy for the innocent. I do think there will be a big shift, but the media will do everything it can. Watch the way they are dealing with the killings that happened in Wisconsin the way in which they are avoiding really dealing with the man who killed those people and trying to hide the issue. The media will do all it can to slow this down and not communicate how bad it really is.

Sure. But you have to understand in the identity politics of the Democratic left, the wrong person was the killer, and the wrong people were killed. Had that been a white racist killing eight black people and wounding another 40, this would be the huge national story. There would be riots in 100 cities and we would all be expected to say the right things. But it is a non-event because it is actually an African American who had posted racist comments, anti-white comments, who had posted that you can use a vehicle to kill people. Now that’s simply not something they will deal with. I will tell you this the American people aren’t stupid. If they get to choose next year between a party that believes we need truck control and a party that believes we need criminal control I have a hunch the criminal control party is going to wipe out the truck control party. That’s where we’re at. These people are crazy. If the president’s spokesperson believes the average American is dumb enough to think oh, it’s too big a problem for the president to visit. He doesn’t want to take away attention. That is just a plain lie. The fact is those families would have been deeply touched if Joe Biden had cared enough to show up and say how sorry he was that that happened. But it ain’t going to happen because they are white and they are local and they were killed by somebody who is African American and therefore in the racist politics of the democratic party, it is a non-event. It can’t be allowed to occur because it breaks up the drama and it breaks up the narrative.