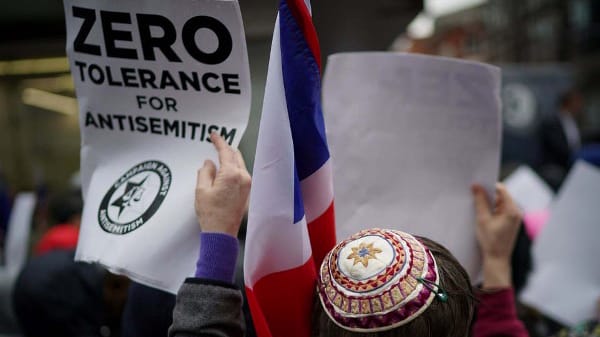 More than 75 years after the defeat of Nazism and the liberation of Auschwitz, anti-Semitism is on the rise.

Tragically, Jews are vilified, demonized, and physically attacked in many places around the world, including the United States.

In 2020, according to the Federal Bureau of Investigation, Jewish Americans, who make up 1.75 percent of the U.S. population, were targeted for more hate crimes than Asians, Muslims, and others combined.

Furthermore, the New York City Police Department’s year-to-date hate crime statistics for 2021 have shown a continuation of this trend in New York City, which has the largest Jewish population in the world outside of Israel.

However, anti-Semitism is not restricted to New York City.

On October 31, Congregation Beth Israel Synagogue in Austin, Texas was set on fire, causing an estimated $150,000 worth of damage.  In early November, the Austin American-Stateman also reported that propaganda depicting hatred toward Jews had been seen throughout the city.

An anti-Semitic banner was displayed on an overpass in a Jewish neighborhood, a high school was vandalized with swastikas and racial slurs, and hateful posters were hung throughout east Austin.

In cities located in Hays County, Texas, people received hateful and troubling letters falsely blaming Jews for the COVID-19 pandemic. These letters were sealed in rock-filled plastic bags and placed in front of residents’ homes.

Similarly, in Beverly Hills, California, residents received anti-Semitic flyers enclosed in rice-filled plastic bags on the first night of Hannukah.  According to the police, the flyers contained “propaganda-style hate speech related to the COVID pandemic and the Jewish people.”

Not long ago, the Trump administration offered historic and unwavering support to Jewish Americans and the nation of Israel.  For instance, in 2018, President Trump signed the Justice for Uncompensated Survivors Today Act.  This law mandates a report to Congress from the U.S. Department of State detailing actions taken by 47 countries to compensate survivors of the Holocaust and their heirs for assets seized by Nazi Germany and postwar communist governments.

Additionally, in 2019, President Trump signed an Executive Order that ensures the enforcement of Title VI of the Civil Rights Act of 1964 extends to anti-Semitic discrimination.

However, anti-Semites and anti-Israel activists have recently been emboldened by Democratic leadership that fails to condemn anti-Semitism and support our most valuable ally in the Middle East.

Representative Ilhan Omar, for example, has a history of making numerous offensive statements targeting Jews and the state of Israel.  In June, Representative Omar tweeted that “we have seen unthinkable atrocities committed by the US, Hamas, Israel, Afghanistan, and the Taliban.”

The Democratic leadership failed to rebuke Omar’s controversial statement and instead, merely “acknowledged” the Minnesota representative made a clarification.  In response to the leadership’s unwillingness to condemn Omar, more than 200 rabbis wrote a letter to Speaker Pelosi which said, “We reiterate that the mob attacks on American Jews today are directly attributable to the rhetoric of Representative Omar and those who stand with her within and beyond Congress.”

The rabbis further wrote, “Without anything resembling a forceful response from the Democratic Party, tolerance of anti-Jewish hatred has proliferated.”

Americans must hold leaders accountable who normalize anti-Semitism in the name of woke politics. Additionally, those who commit hate crimes must be prosecuted to the fullest extent of the law.

This holiday season, may we recognize the resilience, strength, and contributions of the Jewish people and stand in opposition to acts of anti-Semitism that contradict the founding principles of our nation.